The following is an article I voluntarily wrote a month ago for an English magazine targeting teens in Egypt. It’s interesting to look back at my analysis at the time, and how the events have changed, but the fight continues. Hope you like it.

It had been 13 days and the uncomfortable lifestyle consisting of camping and holding ground at Tahrir square was starting to get the better of me. When I first set up a camping tent at the square I didn’t think it would take more than a day or two. But there I was, two weeks into my new home amongst every type of Egyptian that can cross your mind, fighting to the very end.

The night before, Mubarak had us on the edge of our seats eagerly waiting for the belated speech which had promised a lot, but turned out to ooze with boredom beyond tolerable levels, not to mention dangerously disappointing. As the sun was setting behind the beautiful buildings surrounding the revolutionary square, and with the majority of the ‘residents’ praying, we started hearing cheers. Not the usual ones, no. Those cheers were special. They carried a wave of unprecedented freedom. That’s when the thought hit me – could he have finally understood the message and left?

Surely enough, the news was announced and confirmed. Never in my life have I had such a plethora of emotions break out in an instance, and even the endless tears I immediately shed couldn’t handle the magnitude of such news. And I wasn’t alone.

Who can doubt that what we Egyptians have achieved so far is phenomenal? Just ask the millions worldwide who were glued to their TV screens cheering us on. Or talk to the millions of parents who are overwhelmed by what their children have made of their upbringing, and how rewarding it is. 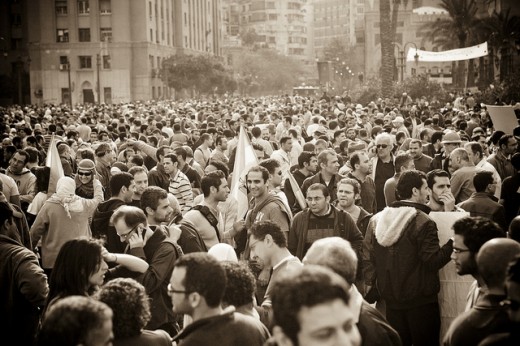 Having said that, isn’t it the logical step to move on with our lives and settle back to normality?

As Che Guevara said to his comrades the day they took Santa Clara and the Cuban dictator fled the country from the capital Havana, “we’ve won the war, but the revolution’s only getting started.”

The demands of the revolution are clear, and have not been completed. Just because we’re in a better situation than what we would’ve never even dreamed of is certainly not a good enough reason to stop pushing for complete victory. What we ask for are basic human rights that are granted by default in any developed country around the world, why settle for any less?

Those who believe that the regime has fallen are either being naïve, or overlooking what really makes a political system (with 30 years under its belt, mind you). The Mubaraks are enjoying breakfast on the beach in Sharm el Sheikh, Omar Suleiman has probably taken on golf with his new friend, the man behind Omar Suleiman. Zackaria Azmy goes shopping with the billions he’s squeezed out of the Egyptian people and drives past police stations and prison cells where he has had hundreds of thousands tortured and killed. Even those supposedly caught, like Adly and Safwat el Shereef have had all the time in the world to funnel out their cash and are being questioned for petty crime as oppose to brutality and human rights’ violations. The general attorney responsible for bringing all of those people in justice was himself an integral part of the old regime, and understands perfectly well that all of the stolen money is hopping out of Egypt via Atef Ebid’s Arab International Bank in time for the ‘questioning’.

I’m sorry to break the news to you, but the regime is alive and kicking, and it will remain that way until the revolution’s complete.

Those political prisoners thrown behind bars without trial, whether for going a few weeks without shaving, or because they’ve decided to voice their opinion, shouldn’t be hearing about the revolution between torture sessions, don’t you think?

The emergency law has been a vital tool for the old regime to control us and mute our voices. In no civilized country do you need a law that allows you to throw random people in prisons without trial, and keep them until you feel they’ve become too much of a burden. Every citizen is entitled to a fair trial, regardless of the crime. If the tens of thousands of political prisoners still dreaming of daylight have committed crimes, so be it, they can be trialed. Otherwise, they should back in their homes, getting on with their lives.

There are innocent Egyptians unjustly behind bars, and it will remain that way until the revolution’s complete.

Many might think that the ‘humiliating’ manner in which the Mubaraks let go of the throne is within itself enough of a punishment. Needless to say, that is far from a balanced reality, and the royal family must be publicly tried. Why is this a pivotal issue? Forget the thousands of political prisoners, forget the hundreds of the revolutionary martyrs, forget the 40% who find themselves below the poverty line wondering where their next meal’s coming from, or how they’ll teach their children to read and write. Brutal, corrupt dictators need to be tried to avoid any remote possibility of future resemblance, and to send a clear message to every single ruler across the globe: you simply cannot get away with oppression against the people.

Dictators in every oppressed country, from the Ivory Coast to China, feel safe while they torture, rape and slaughter their people, and it will remain that way until the revolution’s complete.

You might be tempted to support the idea of moving out of instability, and getting the good ol’ wheel rolling once again. However, that is not feasible. Firstly, even if we were all to give up on the revolution and focus purely on getting back to normality, we are still left with no choice but to see out a temporary phase. It’s inevitable, and comes with any sort of change. More importantly, if we take a step back, the pressure will ease, and every single remnant of the past trio of decades will attempt to keep and even bring back the system to life – it’s their only safety net. It’s perfectly normal to go through a bit of uncertainty and in fact, it’s a very small price to pay in order to achieve a complete victory that would be no less than what we deserve.

Sometimes we get carried away by the events around us and forget the true value of being Egyptian. There’s a reason why we’re one of the oldest civilizations on the planet, and there’s a reason why we were able to topple 30 years of dictatorship without inciting violence. And the reason is that we are well-worthy of every single achievement possible. So let’s not give up what we’ve started and keep fighting peacefully until issues such as corruption, poverty, ignorance and lack of healthcare become of a bygone era.

When we cried in Tahrir square in disbelief at the historical announcement, it wasn’t because we had accomplished our mission, it was because our revolution was just getting started. And as the words of Che Guevara go, “hasta la victoria siempre!”