It could take a considerable amount of time to get properly acquainted with Twitter, but it takes no time to fall in love with it. Regardless of what this Web 2.0 revolution was originally made for, it’s current uses surpass those of the most optimistic of the Twitter founders. A huge factor behind its success in reaching and recruiting millions is its flexible API, permitting anyone to develop software on different platforms that communicate with the service and display it differently, allowing users to interact on a much more profound level.

In a previous article, I briefly discussed the four main methods of communicating with Twitter. The one category that is arguably the most important, since it gives Twitter its unique edge, is that of mobile applications. Tweeting and following other people’s tweets regardless of location is an amazing experience, taking the communication between the diverse crowds to a different level. From this pickle spins off the debate: Which is the best Twitter application for your mobile?

Before answering the question, it is necessary to note that there are various platforms on which mobile applications are built, and unlike libraries such as AIR for the desktop, they don’t tend to be available and consistent across all mobile OSs. There are those who own an iPhone, and have had no problem using the “web device” to access Twitter via the 3.5″ screen and the numerous iPhone applications. On the other hand, there is a minority who are so oblivious to the constant failure of the the Windows operating system on desktops, that they chose to take on the hellish torture with them on the road. Aside from the growing Android-based community, many of the main stream cell phone owners are running a recent version of Symbian or Symbian OS (learn more at the symbian.org FAQ page).

Until recently, Twibble was without a doubt one of the best free Twitter mobile applications. Judging by the number of downloads and the fine print associated with many of the tweets, few were unaware of it, and many fully relied on it. That is, of course, until the German makers decided to force users to pay in order to “activate” their accounts and enjoy full features. If you chose not to, besides the annoying announcements getting in your way, you’d be stripped of some of the striking features that had previously attracted an enormous user base.

Let the research for replacements begin.

The following are the common characteristics that the average twitterer would seek:

Some advanced users might be greedy and demand features such as the ability to follow and unfollow others directly, creating groups to show tweets from certain people only, and viewing a complete list of people you are following, as well as those who follow you. It is of my humble opinion that this might be too much to ask from an application running on the basic processors of cell phones, and displaying on the tiny screens attached. For that reason, the goal is to focus on the applications that cover the main points mentioned above, taking anything extra as a plus.

From a long list of Twitter applications available across all mobile and hand-held devices, the following are the creme de la creme.

Snaptu is a free mobile application that acts as a platform for many apps and services to be built upon. It could be seen as a mini operating system, or a collection of programs that are accessed from its dashboard after opening it. Funny enough, Twitter is but another one of a handful of applications available, but it might just be the most important one. In fact, using Snaptu exclusively for Twitter is indeed worthwhile.

Twitter on Snaptu offers all of the basic features, in addition to the following:

Most importantly, the interface of Snaptu’s Twitter is both very attractive/sleek, and efficient at the same time. The size of the image thumbnails associated with each person is adjusted to not take too much space, while still being visible. It also loads the off-screen tweets on demand, significantly improving performance and reducing the load on the network you’re on (which isn’t always as cheap as we would like it to be).

The major turn off for anyone looking to migrate to Snaptu is its lack of support for Arabic (as well as other scripts). Unfortunately, it is impossible to read the tweets that are written in Arabic, making it a no-no for many-a-twitterers.

Tweets60 is another free Twitter client for any phone running the S60 operating system (a full list of phones that run S60 found here). It is the ideal solution for those who don’t break too much sweat on the extra features, and in fact prefer a simplistic approach. Tweets60 is an example of a mobile application that carries out all of the basic tasks, while maintaining a clean interface making it easy to manage.

This is how it looks on the Nokia E71: 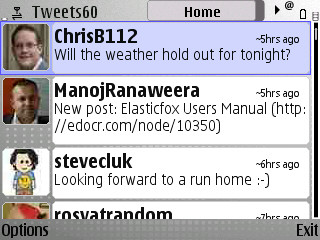 The biggest advantage over a strong candidate such as Twitter on Snaptu is its native support for Arabic. It’s small, light-weight, and displays the Arabic tweets. While there’s a crowd that view that combination as ideal, many could be pushed away by the lack of features and functionality, as well as the dull interface.

At 4,90 Euros, the former number one has exchanged it’s title for a familiar “if you can’t beat’em, join’em”. In all fairness, it is not too much to ask for, but it still results in an inevitable feeling of betrayal when your favorite Twitter application on your cell phone goes commercial over night and forces you to pay to essentially continue using it. It only take a day’s following of the #twibble hash tag to view the furious comments by users from all corners of the globe.

While very powerful, Twibble does not offer all of the functionality found in Snaptu, but it does offer features on top of the basic needs of a twitterer. Indeed it becomes easy to follow hash tags, handle tweets, browse attached URLs and read/write messages.

Above all, Twibble supports Arabic, making it the ideal solution that has taken the best of both worlds, as it offers a large portion of the goodies produced by Snaptu, while being light-weight and properly rendering Arabic tweets.

But it’s not free.

Regardless of the fact that it is priced at a humble 5 Euros (even when ignoring the fact that many people in the Arab world do not have paypal accounts to pay the Germans and use their application), having to pay for something that bring its beauty from Twitter’s free API leaves anyone with a feeling of guilt for investing. Using Twitter, regardless of the platform, application, or motivation behind it, should always be free.

Unless many of the tweets are written in Arabic, you can fully rely on Snaptu and keep Tweets60 on the side for those tweets that you want to be able to read. Otherwise, you might just need to shell out a fiver from Europe and be a legitimate owner of a commercial twitter application on your mobile phone. I personally use Snaptu regularly, and only open Tweets60 whenever there are a series of consecutive tweets that were written in Arabic that I happened to be interested in (and cannot wait until I’m at a desktop). As for Twibble, I’m not even considering paying for a service, regardless of how powerful it is. Soon, there will be open-source mobile apps for Twitter, and Android seems like a strong candidate to set the stage, and let the people act out the play.

I use dabr.nl on my Nokia N95 (Symbian S60). It is not a client, but a mobile site. Makes it feel a tad less snappy, but since the interface is really lean and clean, and it features twitpic and quick replies/retweets and so on, it feels just as nice as, say, twibble.

Moreover: twibble requires you to be online. So does dabr.

Dabr.nl is maintained and run by me. Dabr.co.uk is by the author and developer of dabr, @davidcarrington.

Thanks for sharing. Dabr.co.uk is a very well known Twitter web application, of course. The problem, I’d say, is using the browser for twitter. It is inevitably slower, and reaching links is not as easy as pressing a button and scrolling to the desired option. Moreover, switching between views is not like switching between tabs in a native application, it is more like loading (albeit light-weight) web pages.

Having said that, if I were to access Twitter from a mobile browser (such as Opera Mini), then Dabr would be a very strong candidate. However, I discarded the entire category of mobile-optimized Twitter websites because it is generally more convenient and efficient to use a native application.

Twibble did not “decide” to make their app for money. What we had before was the beta. The new version released Thursday was the first release of the full app. I still find twibble as number one in features, especially with the integration of twitpic uploads. Even though I’m annoyed with the fact that I cant see my tweets easily anymore unless I search for tweets by me

Very few people (myself included) were aware of the fact that the earlier version was beta, and that the final release was going to be commercial. It took us all by surprise.

In all cases, I have faith in the open-source community to produce the ultimate Twitter client for mobiles with all of the features we’re after, and of course, absolutely free.

Open source does not go hand-in-hand with symbian. Maybe on the new maemo platform of the N900? Boy if only I had the money

Fring is free and has a twitter interface.
http://www.fring.com.

@Shady Yeah, I meant open-source on an open-source platform, such as Android, or as you say, Maemo.

@Mark I use Fring regularly to make VOIP calls via my Skype account from my Nokia E71 on the 3G network, and it is truly an amazing solution.

However, for Twitter, the interface is anything but intuitive and it’s really hard to manage – generally inconvenient. I closely tested it (as well as a dozen of other options) before writing up this post, and was particularly optimistic because I already use it on a regular basis and it would’ve been refreshing to be able to integrate the Twitter service while I’m at it. The good news is that there’s always Snaptu and Tweets60!

Great post, T, as always.
I was about to point out the Fring app – since I already use its skype functionality – but I think I’ll follow your advice and try TweetS60.

Actually so far I’ve been mainly using the m.twitter.com website – been doing a good job, supports other scripts, and loads fairly rapidly.

Tweets60’s only advantage is that it renders Arabic properly. But other than that, it’s is very limited. Fring’s is an even worse option. It would’ve been great to have the same app for Skype and Twitter, but unfortunately, that is far from reality.

Generally speaking, Twitter’s mobile-optimized website is not a bad option. But you don’t get to see people’s images (which I think is very important). Moreover, I’ve discarded using any sort of website because it is inconvenient and becomes a bit of a hassle over time.

I’m hanging all of my hopes on Snaptu’s new release, which rumor has it, will support Arabic. By then, it’ll be almost perfect.

Finally, I think there’s plenty of room for improvement as far as mobile Twitter clients are concerned. Therefore, there is reason for optimism, as I am sure many designers and developers will providing us with more options in the future. It can only get better!

Thanks for the review