The Twitter globe won’t stop expanding anytime soon. It only takes a quick observation of the fine print underneath each of the tweets to reach the conclusion that the applications for accessing and managing Twitter accounts are growing by the minute. The question is, which Twitter client is the one you should be using? Like anything else, it’s a matter of what features you require, and which application you’re most comfortable with.

One of the Twitter clients that has stood out and reached millions of Twitterers worldwide is Seesmic. Just like TweetDeck, Seesmic is a free AIR application that can run on any of the operating systems. In fact, it is very comparable to TweetDeck as they both offer many of the same features, it’s the little things that separate them.

Note: The video talks about version 0.4. The latest release, at the time of writing, is 0.6, but the points raised in the video still apply.

Seesmic can be used to manage multiple Facebook and Twitter accounts, but it is safe to assume that the huge majority of users are operating the French invention exclusively for a single Twitter account. Within the same window, you can create your columns based on the groups of people, as well as hash tags, that you would like to follow. Handling tweets is a breeze, and a URL shortner, tweet shrinker and image uploader are all natively integrated. It is an exceptional Twitter experience on a large display. 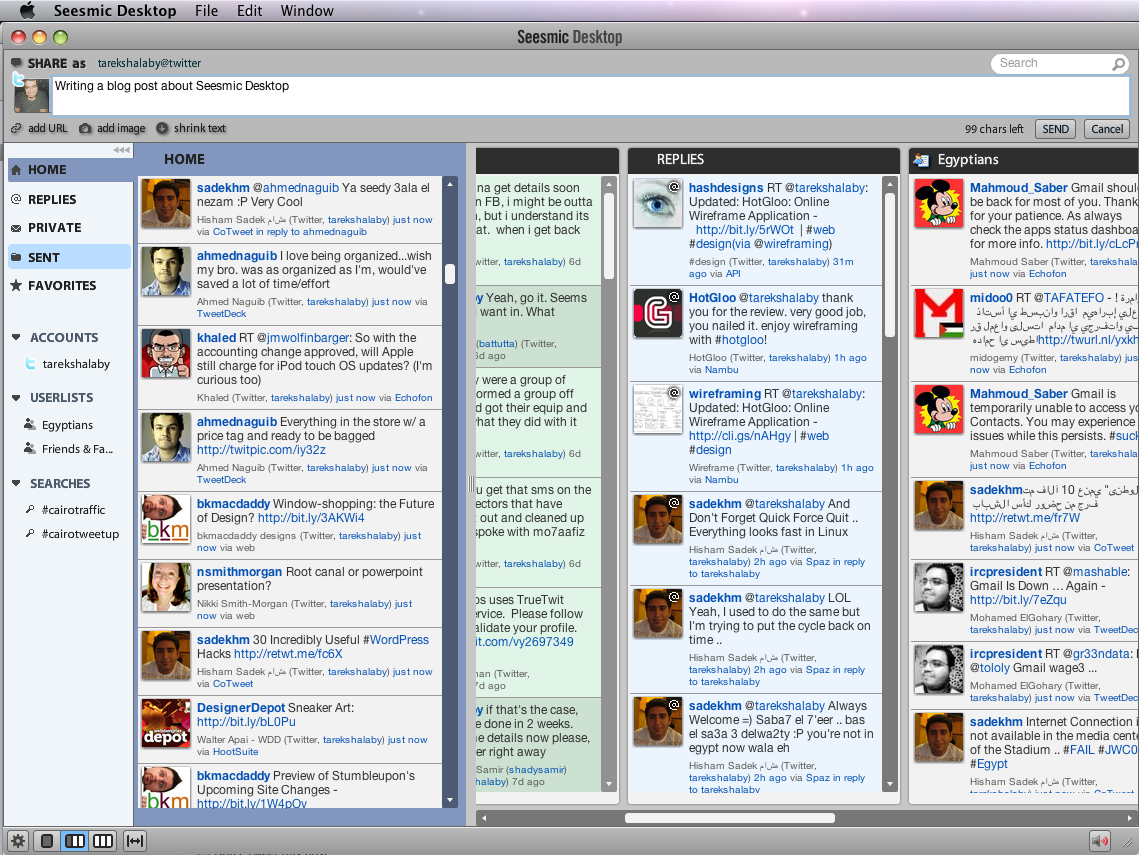 When comparing to TweetDeck, the following are the differences and thus, the advantages. But then again, it is a matter of personal preference:

Unfortunately, there are a couple of points that might push people away from the Twitter client. The first is the difficulty in which users can add Twitterers to favorite groups. When you create a group, you have to go to one of the desired person’s tweets, click on the options icon, and add him or her to the list.

The second issue, which is also found in TweetDeck, or any AIR application for that matter, is the lack of support for Arabic and non-traditional languages. This is obviously a huge drawback, and it seems that, on a Mac, a web application is the only way around the lack of Arabic support. Perhaps Adobe will upgrade their runtime to allow for Arabic and Asian scripts, but in the meantime, if the majority of the people you’re following tweet in Arabic, you are better off going “web” and using an online application, such as HootSuite.

Otherwise, a neat AIR application that it light-weight, easy to use, and gets the job done. And comfortably so.

I agree. But remember that they’re on version 0.6, which means two things:

1. It spares them responsibility for any inconsistent behaviors (because they’re not 1.0 yet)

2. It raises expectations for the full release. When 1.0 is out, I expect there to be absolutely no issues with the Twitter client across OSs

Bare in mind that it could also be as a result of the inconsistencies with AIR, making it difficult for software makers to produce the exact same products for all OSs on AIR. Time will tell how things develop.