France to the rescue: the liberation of Mali’s uranium

After almost 20 years of right-wing rule in the French republic, Social Democrat Francois Hollande came out victorious in a tight presidential race. His ousting of Nicolas Sarkozy brought a lot of hope to many left-leaning Europeans who were tired of having to normalize with the xenophobic rhetoric, to say the least.

Hollande promised to withdraw the French troops in Afghanistan, resist the increasingly harsh austerity measures enforced by the Germans, and press on progressive taxation to ease on the growing gap between the rich and the poor in France. His program (French) was built on the fundamentals of social democracy that few would argue is not a start in the right direction. 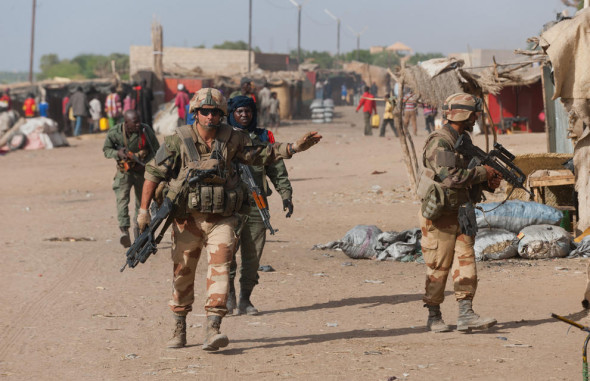 The French troops on the ground in Mali

Three months prior in Mali, Captain Amadou Sanogo lead a military coup d’etat and forced elected president Amadour Toure into hiding. Toure had been a national hero since the revolt in 1991, and won democratic elections in 2002, and was then reelected in 2007. In fact, Toure only had one month to go before it was time to leave office and make way for the winner of the following elections. But US-trained Sanogo and his faction within the military were displeased, and deemed Toure’s administration of the country incompetent. With the Tuareg in the North claiming to be marginalized and calling for independence, the situation became visibly unstable immediately following the military takeover.

Needless to say, few approved of a military coup d’etat, and Sanogo was pressured into assuring that he would hand over power to an elected civilian president. Makes one wonder why the coup ever happened in the first place, given that Mali was due for elections weeks later, and Toure was no longer eligible to run. But as events unfolded, it became less of a mystery.

Sanogo then appointed Dioncounda Traore as interim president until elections take place. This means that two things have changed; first is that the elections are due at a much later date than scheduled prior to the coup. Secondly, and perhaps more importantly, Sanogo suggested that the military will overlook the elections. 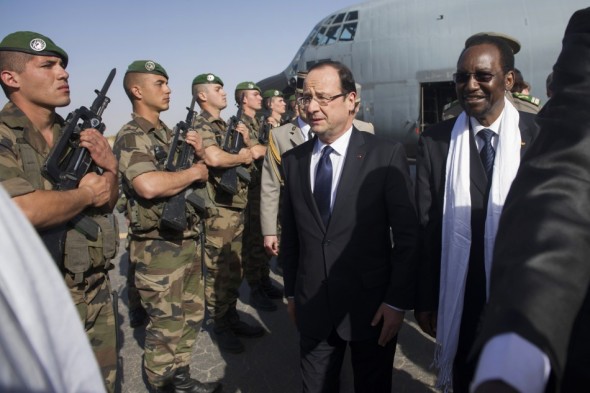 North of Mali is a complicated region, with different groups who are not exactly on the same page, if equally hostile to the central Malian government. The separatist Tuareg group made most of the headlines prior to the coup. Their discourse is secular, and their demands are clear: independence for the much marginalized people in northern Mali (a region known as Azawad). Conveniently, following the introduction of French troops in Mali, the Islamist groups, mostly represented by the salafi Ansar Al Dine, were in the spotlight. Tauregs and Arabs from the Azawad region make up the overwhelming majority of the groups.

Francois Hollande’s discourse will sound familiar to those used to watching presidents prepare for a military intervention. As you’d expect, Hollande declared the ‘terrorists’ of the north a serious threat to the existence of the Malian state as a whole. He rallied the troops to ‘liberate’ Bamako from the approaching extremist Islamists who are armed and furious. But of course, France will not repeat its colonization of Mali, which ended in 1960, but will instead ‘firmly abide’ by the UN resolution drafted in December. This means that the coalition of forces entering Mali will be led by the neighboring African nations, and that the intervention takes off at the demand of the Malian authorities providing only the help the government asks for. This ensures a civilized and democratic end to the political crisis.

Coverage in western media, including state-owned France24, were quick to assert the president’s claims:

This report, like many produced by France24, refers to the fighters in the north as ‘extremist Islamists’. Moreover, all fighters are labelled ‘Mujahideen’ (Islamists fighting in the name of God), completely ignoring the secular Tuareg majority, as well as the Tuaregs and Arabs fighting on behalf of the northerners and against the discrimination of the central government. They also use the term ‘ghazw’ which means invasion and, when coupled with ‘holy fighters’, could refer to the battles during the time of the prophet, with implications that couldn’t be further from the truth.

In typical state-media-propaganda fashion, the only person they interview is a French citizen in Mali – not a single Malian gets to speak in the report. This is part of the efforts to portray overwhelming support for the French troops (based on declarations by a French citizen) without even running images of the Malians expressing approval.

TV5, also government-owned but more popular within France, performed an ‘in-depth analysis’ of the issue four days into the intervention:

As you’d expect, the guest is a French ‘specialist in Islamist terrorist’ affairs, and the introductory report refers to the Islamists resisting the intervention from the north as ‘terrorists’ and ‘extremist Islamists’. It is a war against terrorism, liberating the Malians from the armed terrorists of the north.

The western propaganda machine, in this case lead by French media, fail to clarify a few points.

Secondly, There was never any talk of an Islamist threat in the north prior to the military coup, and, in fact, the word ‘terrorists’ only appeared when France planned for an intervention. What mattered before that were the Tuareg separatists, which appears as a legitimate demand for independence from a centralized government where the Tuareg and Arab people of the north are completely marginalized by the capital.

Moreover, there’s no evidence that the Islamist groups from the north have any relation to Al Qaeda. The only connection is that Ansar Al Dine’s leader, Iyad Ag Ghaly, has a cousin by the name of Hamada Ag Hama (there’s little information about him) who leads a faction within the Al-Qaeda in the Islamic Maghreb. Tim Lister explains on the CNN website that there’s no direct link whatsoever, quoting Warwick University fellow Salma Belaala who assures that “we can’t make a systematic link between the AQIM and Tuareg. It’s completely false.”

At the same time, the armed resistance is comprised of locals from Mali, which strongly suggests that these moves are popular to a certain degree and have the backing of many who despise the central government.

It shouldn’t be overlooked that France entered on its own, and then later on, neighboring countries joined with insignificant armies that are not exactly deal-breakers. More than 4,000 French troops are currently on Malian soil, and the delayed deployment of forces by neighboring African countries – with the exception of Chad’s 1,800 – merely introduced hundreds from armed forces decades behind the French.

And if threat by armed Islamist groups is the concern, then Mali is quiet down the pecking order. The Philippines, Bangladesh and Somalia – to name but a few – have, for years, suffered without response from the international community. As for thousands being displaced, there’s no need to look further than Israel, who has forced millions out of their homes and has broken dozens of UN resolutions. 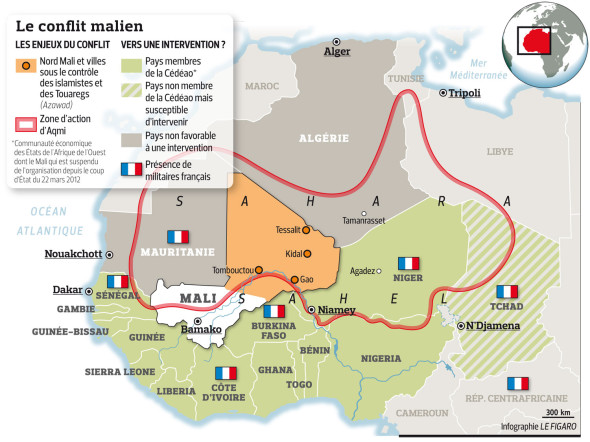 French military presence in the region, and the area of conflict encompassing uranium deposits

The entire northeast of Mali borders Niger, one of the poorest countries in the world, but, along with Mali itself, hosts some of the largest uranium deposits. This is of particular importance to France, as 78% of its energy is nuclear. Over 30% of the uranium imported by France comes from Niger. More specifically, French company Areva works closely with mines in the region, and is in charge of 4 major uranium mines, and is currently building what will become the second largest uranium deposit on the planet. Areva currently employs over 2,600 workers in west Niger near the border with Mali (naturally, almost all workers are Tuareg).

Mali enjoys a wealth of gold, mainly processed by the Canadian company Rockgate. The plethora of minerals in the country is of special interest to French Areva, not just Canadian Rockgate.

The Tuareg people cover the entire region from northeast Mali to western Niger. Without handling the concerns of the Tuaregs, there’s no easy access to the 3 uranium mines they cover. More importantly, there is evidence to suggest that the south western region of Felea, bordering Guinea, is home to about 5,000 tons of unexplored uranium. Rockgate dedicated a section on its website to the region, with a detailed news release exposing the potential for many minerals, including the much sought-after uranium.

In a short piece (French) in the Algerian paper Liberte, Mounir B put it nicely when he said that the French intervention in Mali – code named Operation Serval – spoke for itself; “for those of you who don’t know, the serval is a small African mammal that urinates 30 times an hour to mark its territory. Precisely.”

Following multiple attempts to separate from Mali, the Tuaregs finally managed to accomplish just that following the military coup and the void of stability rocking the country. But since independence was not manageable, and coupled with the lack of security, Islamist groups found the opportunity to push for their own agenda. They share enough with the Tuaregs to create an alliance, albeit with differences causing issues.

Some of the Islamists are a serious threat, there’s no doubt about that. They enjoy popularity on the ground, but are extremely intolerant with those whose support they’re not granted. The introduction of French troops on Malian soil only helped legitimize their brutal crimes, and their attack on ancient Malian heritage in the name of Islam. They’re a threat that cannot be violently confronted until you rally enough support against them, and expose them to weaken their backing.

But in Africa, no one’s voice is heard.

On top of all this mess, France shoots in with bomb-dropping aircraft and with troops on the ground, resulting in hundreds of thousands displaced internally and across the borders, as well as many dead throughout.

In an articulate piece (Spanish) for eldiaro.es, Olga Rodriguez brings forward the sort of questions Hollande’s administration have completely avoided, like whether or not Hollande calculated the cost in terms of civilian lives of the military intervention. “It’s important to note that, above all, the French need to put the interests of the local population first. But in Africa, the developed world’s mine, nothing seems to be like it should be.”

What France is doing is an invasion. It’s an undemocratic invasion with the sole objective of protecting the interest of the French corporations. It was done by France alone, and had little or nothing to do with the Islamists. The propaganda across the French outlets has orchestrated the misinformation of millions to hail the heroic French who are risking their lives to fight Islamist terrorists and liberate Mali. Hollande’s path is no different than Sarkozy’s, and his rhetoric to justify the occupation is almost identical to Bush before the American tanks marched through Baghdad.

It’s a tough situation, there’s no doubt about that. But a foreign invasion is not the solution. I’m not claiming to hold the secret recipe to solve the Malian crisis, but I know that we can start with the Malian people. The country was due for democratic elections a month after the military coup. Let the Malians vote, let them choose, let them decide, and let them make mistakes. We’re in no position to decide what’s best for them without involving them. We’re in no position to take the word of an interim president appointed by the military as a cry for help by the Malian population. Mali’s resources belong to the Malians.

Why do we keep acting like Africa is a region incapable of self-determination? When a French soldier dies, it’s all over the news, but until the corporations’ uranium is at risk, hundreds of thousands of Africans die in silence. Their voices ignored. Their freedom confiscated. Their dreams shattered.

Perhaps it’s time we liberate ourselves.