As we find ourselves in turmoil, there’s a lot to talk (and fight to the death) about.

The Muslim Brotherhood’s Morsi whipped out a jaw-dropping decree to ‘protect the revolution’ while conveniently having the MB-dominated Islamists cook up a constitution overnight. The entire process is outrageous, and very few non-blindly-Brotherhood would brag about how representative the committee was, or how revolutionary the constitution can ever become. But there’s no reason to whine about everyone’s enemy. A follow-up decree just successfully made this all more confusing, and kept the SCAF-backed MB grip on power solid.

What is truly disturbing is the ever more clear collaboration between SCAF and MB that has Islamists believing this constitution is as close we can get to being ruled by the holy Quran, while remnants of Mubarak’s regime are inclined to support SCAF against an ‘Islamic takeover’. As if both sides, who are politically opposite but economically identical, are speaking out their preconceptions without even reading the constitution.

There’s nothing Islamic about the constitution. Nothing. In fact, a minority of Salafis spoke out their concerns regarding the secularism at a time that is seen as a golden opportunity to apply God’s rule. This constitution is SCAF’s work; a collection of articles that even Mubarak would’ve been reluctant to include if he wasn’t absolutely certain the executive branch was permanently his, the legislative of his party, and the judicial…well…just like we have it today – intact and unchanged. The constitution will allow for Islamic rulers to go Islamic on us, but it can also allow for a secular dictatorship.

[youtube width=”590″ height=”443″]https://www.youtube.com/watch?v=Sx4e5LhTD8Y[/youtube]
To defend their decree, the Muslim Brotherhood called in Salafi sheikhs to support Morsi’s decisions in the name of applying Sharia – something completely unrelated and in fact contrary to their stance weeks earlier on the same constitution

Makes you feel SCAF were touched and flattered by how Morsi took the bullet to make sure they continue ruling behind the scenes. Surprises like how the Ministry of Interior is unchanged, and in fact worsened, make you wonder if even Sabbahi would’ve been any different.

Whatever. If you want to know why this entire farce is a disgrace, take a look at the HRW report. After all, how can you come to terms with a constitution that starts by praising the armed forces:

Our Constitution, the document of the 25th of January revolution, which was started by our youth, embraced by our people, supported by our Armed Forces

What is a cause for serious concern is article 53. Carefully embedded within a layered cake to fly by unnoticed, article 53 is the single most violating act, a clear unity between the counterrevolutionary forces:

Trade unions are regulated by law and managed on a democratic basis, the accountability of their members subject to professional codes of ethics. One trade union is allowed per profession.

Authorities may not disband the boards of trade unions except with a court order, and may not place them under sequestration.

Like almost every other article in this masterpiece, the rules are set by stating the opposite. By giving rights to create only one labor union per profession, the constitution clearly bans the formation of independent labor unions. This means that, the only means for any workers to mobilize for their rights is via the government-owned, MB-run syndicates whose specific objective is to shoot down any revolutionary activity. 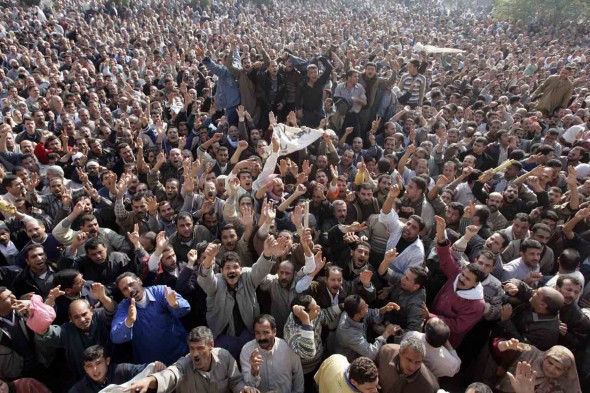 Prior to #Jan25, there were only three independent labor unions (The tax collectors, hospital technicians and pensioners’ union). On February 8th, 9th and 10th, 2011, labor strikes covered the entire republic and Mubarak was immediately forced to stop down. Less than two years on, estimates say there are over 300 independent labor unions ranging from waiters in cafes, to machine-operators in factories, teachers in public schools, and administrative workers. If the referendum takes place come December 15th, all of those unions will be unconstitutional. Not illegal – unconstitutional. Even if Khaled Said and Mina Daniel come back to life and rule Egypt, all those unions, and future ones, cannot be allowed to exist without amending the constitution (and we’ve all seen how easy that is).

If that’s not the biggest hit to our revolution…

Article 53 is more than the disgraceful content. It is a symbol of how SCAF and the Muslim Brotherhood have formed a strong union (no pun intended), and all those counterrevolutionaries who have decided to avoid the rhetoric of the production wheel and economic stability to combat the Islamists, are completely overlooking this catastrophe. And the reason is simple: if you’re after bread, freedom and social justice, article 53 will bring revolutionary fury. But if your after political control over Mubarak’s neo-liberal status quo – knowing perfectly well how this will make the 40% under the poverty line grow further – then there’s no reason to bring it up.

The figures from the old regime are coming back and are trying to pull an ikhwan on us. Mubarak’s long-serving, loyal Amr Moussa is leading the ‘opposition’, while he had spent more than 20 years helping kings and dictators torture and kill those who dared to speak up for their rights in Egypt and across the entire Arab world.

[youtube width=”590″ height=”443″]https://www.youtube.com/watch?v=Zu5s1mExI8o[/youtube]
Amr Moussa praising Mubarak and his son Gamal. Shockingly, some consider him to represent the ‘opposition’

Well, we’ve been exploited by the Muslim Brotherhood, that much is true. But this is not an invitation to bring back Mubarak’s gang. We might not be as organized as we should be, but this doesn’t mean we are willing to lean back on the very regime we’ve been suffering from for over 30 years in order to muscle out opportunist Islamists. Both sides consistently claim that we are incapable of revolting without them, both sides are trying their best to take full advantage of us and control us, and both sides form the counterrevolutionary forces that are delighted with the extreme violation of workers’ revolutionary rights.

#Jan25 continues until we rid Egypt of the Muslim Brotherhood, Mubarak’s regime, and, most importantly, SCAF. And nothing can stop the rage of millions craving social justice. Not even article 53.

also important to note that right after Morsi’s Nov. 21/22 constitutional decree (which he claimed was necessary to protect democratic institutions) – a few days later while he had the power to make laws he announced decree #97 affecting labor unions:

and another article here:
http://mideast.foreignpolicy.com/posts/2012/11/28/power_grab_on_egypts_unions

Begs the question – why announce such a decree when you’ve just suddenly consolidated your power? And what do labor unions have to do with the then constituent assembly being threatened?

Nice ya B-Pops! Thanks for sharing.

It’s becoming clear that the biggest threat to the regime, regardless of whether it’s the NDP or MB, is the organization and mobilization of the working class. Even if it’s not workers in the traditional sense – the existence of Ultras who started chanting against SCAF 4 days before the Port Said massacre had the authorities screaming – if the masses organize and unite, the revolution picks up.

Mubarak had successfully crushed the labor movement to the extent that even the revolutionaries cannot see the direct link between the workers’ struggle and the popular revolt. Thankfully, we’re gaining exposure and experience, and it’s only a matter of time before the linkage is strengthened and coordinated.

Sadly enough, very few of the ‘kanaba’ and feloul advocates care about social justice. Maintaining the poor who create a reserve army of labor is essential to their plans to gain power at our expense. Combating the labor movement bring together the remnants of the old regime, the Muslim Brotherhood, and SCAF.

It’s the 40% under the poverty line that will stand in the way of Morsi’s neo-liberal policies, and it’s the 99% that will deem him illegitimate and bring him down completely.