My vote goes to Jill Stein in the US presidential farce

After having actively, and proudly, boycotted the Egyptian parliamentary and presidential elections (both rounds), I took a seemingly inconsistent approach to the play taking place at the other side of the Atlantic, where many of the calls are made. Although 100% Egyptian, my American passport allows me to partake in the elections where the Republicans and Democrats go head-to-head and collectively overlook poverty, death, torture and corporate domination and focus on the fine details of the superficial design on either side of the same old coin we’ve been swallowing for decades.

In 2004, I participated in the first elections when Bush was threatening to get reelected, and Kerry was the only force against him. The United States, and indeed the world, was in dire need to halt W from driving the third world’s people, and the entire world’s climate, into complete mayhem. Moreover, since I’m registered in swing-state Pennsylvania, I had to act. For that reason, I decided to take part and do what I can, and I feel rewarded for voting for Ralph Nader (and donating to his campaign). I voted for him again in 2008, this time from the American embassy in Cairo.

Few would argue that the American political system is acceptable by any standards. And given America’s vital role in the daily lives of the overwhelming majority of the world, this change is urgent. In 2004, I failed to see any potential in change within the American infrastructure, and Ralph Nader simply asked the questions everyone around the world was wondering. He brought to the table the kind of issues that were taken for granted by the ever-controlling mainstream culture and media. He represented the path to change. He knew he was never going to win – we all did. But just like Buthaina Kamel fought to get on the ballot in Egypt’s first post-revolution elections (and both my mom and I gave her signatures), Nader wanted people to feel they had the right to complain. The right to feel offended.

While our American counterparts give us all the credit for inspiring them to occupy Wall Street, the roots to the revolutionary movement within the world’s superpower preceded Tahrir square. In recent years very few, if any, political figures were able to access mainstream media to bring to the people’s attention the catastrophic state of American politics. Nader helped give a small revolutionary minority hope.

Although I feel completely distanced and unrelated to all aspects of American culture, the Occupy movement made me feel like my siblings and cousins were taking the streets, and I couldn’t make it because we’re working in parallel here, on the same battle. It was a good problem to have.

Had Occupy been anywhere near as active as it was about a year ago, then a complete boycott of the newest version of the farce called the US presidential elections should’ve been completely overlooked. In fact, I consider the boycott of bourgeois elections a viable option to consider at all times. And while I have barely been following the political developments of the United States, there seems to be inconsiderable activity on the ground. Few strikes have been making it to people’s talk, few demonstrations have gotten in the people’s way to work, and the Occupy movement seems to be on the lower end of the curve. Only a matter of time before we bounce back, now.

Unfortunately, the balance in the power spectrum is not to our advantage, and the 1% are in a favorable position – albeit momentarily. Having said that, the priority is not visible change, this will inevitably come in a few years (after all, how long can you force Americans to live in misery and think that’s perfectly fine?). The point is to inspire the people to feel indignados. To provoke them to complain. To help them reach the realization that they’ve had enough, and that they deserve better.

Neither Romney nor Obama will ever come close to nourishing the revolutionary tendencies within the American people – their job is to oppress them, and make them accept injustice on every level. Needless to say, there are some differences between the candidates, but the most attractive coins always boasted completely different designs and messages on either side. And in the grand scheme of things, the issues facing the United States and the world go way beyond either party’s talk. The only way for there to be social justice, is for the system to be completely restructured by the American people themselves. This implies direct democracy, workers’ rights, transparency, freedom of information and numerous other aspects of a society that the American ruling elite will never allow – not voluntarily, anyway.

While some revolutionaries may vote for Obama to avoid the seemingly worse Romney, the fact of the matter is that we all deserve better. And we can do better. And voting for the lying war criminal who forced the American poor to bail out the rich bankers while stepping up the military’s budget and power, is never going to place us on the track to make this world a better place. Between expanding the National Security state, and solidifying an inhumane war record, Obama is continuing the track of empowering the 1% at the expense of the world’s 99%. Every day that passes without working against the regime is proving to cost too many lives and inches off the ice caps. And if you think that change is too big of a dream given today’s circumstances, remember how the Occupy movement sparked unprecedented revolutionary anger capable of defeating the strongest opposition. And it’s coming back very soon. 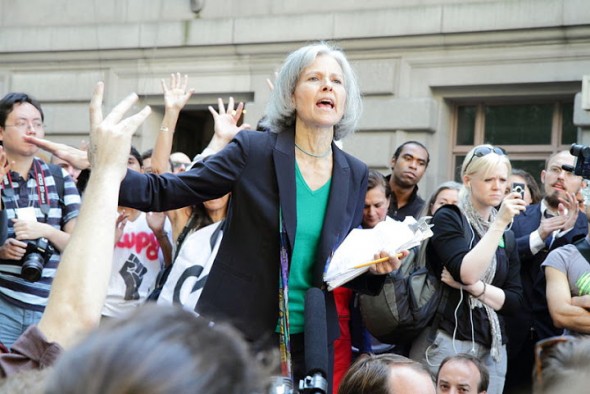 Voting for Jill Stein of the Green Party meant promoting her platform that brings to the table the kind of problems we should all be discussing. The kind of problems corporate America actively avoids in the congress, senate, and mainstream media. Her stances on issues are something we will visit in the future in complete awe – how on Earth were the people still protesting this?

Jill Stein represents what every American would want, but is completely unaware that it is an option. Her symbolism carries the torch forward where Nader left off – himself, along with Noam Chomsky, publicly advocating the green party candidate. It’s not about getting her into office, it’s about making her message reach as many Americans as possible. That is why I queued up along with Taha ‘B-Pops’ Belal at the American embassy in Cairo yesterday, and we wrote in Stein’s full name, along with that of her vice, Cheri Honkala.

If the revolutionary movement on the ground kicks off before voting day in a couple of weeks, I would actively call for a boycott. If not, then let’s take advantage of the American farce that has always provided us with identical policies (that have only recently come in different colors), and spread the revolutionary message that reminds us that we don’t need to put up with injustice any longer. We deserve better, and we’ll object and go on strike for our rights. Change is just around the corner of the next financial stronghold we #occupy. And victory in the global revolution’s inevitable.