Friend and comrade Karen Dominguez bought me Leon Trotsky’s classic The Permanent Revolution which also includes his 1906 book, Results and Prospects. I’ve finally had the chance to thoroughly read the first half, and it inspired me to share my reflections on Trotsky’s ideas from over a century, with points that, with regards to the ongoing Egyptian revolution, appear to be relevant.

The following are excerpts that have left their marks, with a brief note on how so. 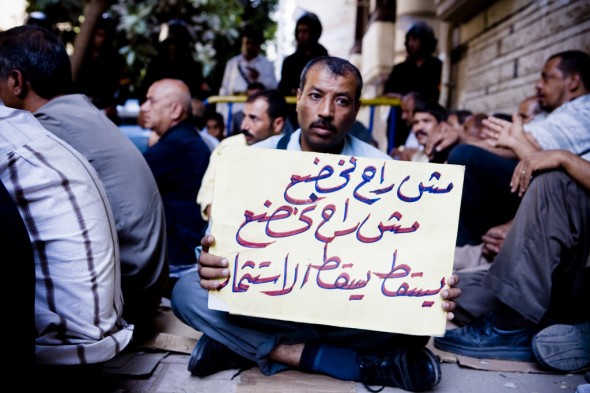 The essential economic feature of the modern town lies in the fact that it works up raw materials supplied by the country. For that reason conditions of transport are decisive for it. Only the introduction of railways could so greatly widen the sources of supply for the town as to make it possible to concentrate such large masses of people. The necessity for concentrating the population arose out of the growth of large factory industry. The nucleus of the population of a modern town, at least of a town possessing some economic and political significance, is the sharply differentiated class of wage-workers. It was this class, as yet substantially unknown during the period of the Great French Revolution, that was destined to play the decisive role in our revolution.

It’s interesting to see the dynamics of the Egyptian population change since the 90s. Cairo’s population doubled at one point, and millions of Egyptians moved away from agriculture in the Delta and Upper Egypt, and migrated to the cities in search for job opportunities in the industrial sectors. Our motives over the past decades were completely different from those in Czarist Russia, but the end result is similar: a differentiated class of workers.

By economically enslaving this backward country, European capital projected its main branches of production and methods of communication across a whole series of intermediate technical and economic stages through which it had to pass in its countries of origin. But the fewer obstacles it met with in the path of its economic domination, the more insignificant proved to be its political role.

Mind you, this is referring to Russia at the end of the 19 century as European investments created a growing industry in the country. Mubarak’s neoliberal policies have proven to allow for foreign investments to economically dominate us.

Revolution is an open measurement of strength between social forces in a struggle for power. The State is not an end in itself. It is only a machine in the hands of the dominating social forces. Like every machine it has its motor, transmitting and executive mechanism. The driving force of the State is class interest; its motor mechanism is agitation, the press, church and school propaganda, parties, street meetings, petitions and revolts. The transmitting mechanism is the legislative organization of caste, dynastic, estate or class interests represented as the will of God (absolutism) or the will of the nation (parliamentarism). Finally, the executive mechanism is the administration, with its police, the courts, with their prisons, and the army.

One of my favorite excerpts – especially the opening sentence that eloquently defines a revolution. It’s also interesting to place the government as the main enemy, when really it is nothing more than the tool protecting the ruling elite behind it. The government is the symbol of the regime that we try to bring down, but it is not the end goal in itself. How a government works to oppress the people is rather intricate, and that balance is necessary to prevent any sort of revolt, but of course, it’s not sustainable.

There can be two forms of political optimism. We can exaggerate our strength and advantages in a revolutionary situation and undertake tasks which are not justified by the given correlation of forces. On the other hand, we may optimistically set a limit to our revolutionary tasks – beyond which, however, we shall inevitably be driven by the logic of our position.

This is brilliant, and it’s the subject constantly discussed whenever a Tahrir sit-in is brought to the table: are we in a strong enough position to be making such decisions? This doesn’t mean that we should be embracing a defeatist attitude in the name of wise realism. It does, however, mean that our optimism should lie in our aspirations in coming out victorious with our revolutionary demands, but not fool ourselves into believing that we are in a much stronger position than we actually are.

This brings us back to the debate on whether or not to participate in bourgeois parliaments, and to what extent. In my earlier post on revisiting the mainstream Marxist approach to bourgeois elections, I argue against including ‘honored hostages’ that give legitimacy to the very regime we are trying to fight.

The history of capitalism is the history of the subordination of the country to the town. The industrial development of the European towns in due course rendered the further existence of feudal relations in agriculture impossible. But the countryside itself never produced a class which could undertake the revolutionary task of abolishing feudalism. The town, which subordinated agriculture to capital, produced a revolutionary force which took political hegemony over the countryside into its hands and spread revolution in state and property relations into the countryside.

The situation has changed significantly. In rural Egypt, many farmers are becoming wage-workers for businessmen who own large pieces of land and relatively modern machinery. In which case, the peasantry can in fact unite with the town workers in revolting, something that perhaps was not feasible in the capitalistic revolutionary movements that helped abolish feudalism.

The proletariat, once having taken power, will fight for it to the very end. While one of the weapons in this struggle for the maintenance and the consolidation of power will be agitation and organization, especially in the countryside, another will be a policy of collectivism. Collectivism will become not only the inevitable way forward from the position in which the party in power will find itself, but will also be a means of preserving this position with the support of the proletariat.

The challenge here is to bring everyone on board with the collectivist project, and I think this needs to happen before the revolt. That’s why I support postponing the workers’ revolt against the capitalist regime until the overwhelming majority of the working class are avid supporters and believers in the movement. This would reduce the numbers of working class members joining the counterrevolutionary movement in reaction to the uprising, and would make collectivism the logical way for everyone moving forward. But then again, it’s difficult to theorize when the situation on the ground is always unique on many levels.

We will begin with the last-mentioned process – the growth of consciousness. This takes place, as we know, not in academies, in which it might be possible artificially to detain the proletariat for fifty, a hundred or five hundred years, but in the course of all-round life in capitalist society, on the basis of unceasing class struggle. The growth of the consciousness of the proletariat transforms this class struggle, gives it a deeper and more purposeful character, which in its turn calls out a corresponding reaction on the part of the dominant class. The struggle of the proletariat against the bourgeoisie will reach its denouement long before large-scale enterprises begin to dominate in all branches of industry.

This is where technology comes in. Communication with instant news and interactive multimedia allows for the rapid growth of the consciousness. With contact comes exposure. With exposure, experience. With experience, consciousness. Educational institutions, mainstream media, official sources of communication, all project a clear, counterrevolutionary rhetoric. The beautiful internet, on the other hand, is a tool that exposes anyone and everyone to all perspectives of the spectrum, and hence, raising the level of consciousness.

One of the fundamental services rendered by scientific socialism consists in that it theoretically discovered such a social force in the proletariat, and showed that this class, inevitably growing along with capitalism, can find its salvation only in socialism, that the entire position of the proletariat drives it towards socialism and that the doctrine of socialism cannot but become in the long run the ideology of the proletariat.

I take comfort in believing that the revolution, and the victory of the working class, is inevitable.

Articulate and to the point. With the rise of capitalism and the exposure and consciousness of the working class, the societal conditions push us all to the socialist attitude, not the other way around. It’s not about indoctrinating and forcing the ‘right’ message on the masses.

The Russian proletariat revealed a colossal strength, unexpected by the Russian Social-Democrats even in their most optimistic moods. The course of the Russian revolution was decided, so far as its fundamental features were concerned. What two or three years ago was or seemed possible, approached to the probable, and everything points to the fact that it is on the brink of becoming inevitable.

That’s exactly how I feel about #Jan25. Political defeatism, inside and outside of Egypt, was increasingly popular prior to January, 2011. I’d like to believe that the Egyptian revolutionaries, from all sides of the spectrum, have proven that you can never rule out the possibility for political change, and eventual social justice.

Left to its own resources, the working class of Russia will inevitably be crushed by the counter-revolution the moment the peasantry turns its back on it. It will have no alternative but to link the fate of its political rule, and, hence, the fate of the whole Russian revolution, with the fate of the socialist revolution in Europe. That colossal state-political power given it by a temporary conjuncture of circumstances in the Russian bourgeois revolution it will cast into the scales of the class struggle of the entire capitalist world. With state power in its hands, with counter-revolution behind it and European reaction in front of it, it will send forth to its comrades the world over the old rallying cry, which this time will be a call for the last attack: Workers of all countries, unite!

While I don’t see the problem of the separation of the peasantry relevant to the conditions of the 21st century, the counterrevolutionary forces, especially with the help of the foreign capitalist powers, is an eminent threat that needs solid preparation. That is why a revolution anywhere in the world, especially in the US and Western Europe, is directly helping us here with our struggle.

The tempo of the revolutionary process is a special question. It depends upon a number of military and political, national and international factors. These factors may retard or hasten developments, facilitate the revolutionary victory or lead to another defeat. But whatever the conditions may be the proletariat must clearly see its path and take it consciously. Above everything else it must be free from illusions. And the worst illusion in all its history from which the proletariat has up till now suffered has always been reliance upon others.

Trotsky ends Results & Prospects in beautiful fashion. As #Jan25 continues, the Egyptian working class needs to rise up, communicate, organize, mobilize and fight for bread, freedom and social justice. No one’s going to do that on our behalf, and we are more than capable of reaching victory ourselves.

A Trotskyist 1993 is not a Trotskyist.
He is a néotrotskyste, neo-Marxist.
A Trotskyist 2012 is not archaeologicalTrotskyist, it is POST-MARXIST.
He sees the new exploiting classes.
and therefore, it refreshes the grid Parvus and Trotsky 1905.
He understands that the process of Permanent Revolution must not only socialize capital-machine, but also human capital : formation capital owned by the formoisie and innovation – capital owned by the innovoisie

I CANNOT PUT THE END of my beginning ….. SEE THE LINK to my facebook….
Translation + english