No one said it was going to be easy.

The ongoing Egyptian revolution, like any other, goes through ups and downs. The bumpy road is rather harsh on those who celebrate victories momentarily, and let the consequences of the losses drag on. While the current phase is not exactly a positive indicator in terms of achievements versus sacrifices, there’s plenty of room for optimism. In fact, it is our responsibility as supporters of the revolution and partakers in it to find and focus on the bright light at the end of the tunnel.

In Spain the 15m movement tosses around the term ‘indignados’ quiet a bit. Indignados translates to offended, but it implies much more than that. Someone who is indignado is someone who is simply not satisfied with his or her life. It’s not about being politically active or having a twitter account with tens of thousands of followers. It’s not about reading the news everyday and creating detailed analysis on the geopolitical situation of the region. It’s not about knowing what exactly the problem is and how it should be solved.

Someone who feels indignado is someone who is simply sick and tired. We’ve had enough, and we deserve better. We don’t know who the members of parliament are, nor what their job is exactly, we just know that we are not happy, and we shouldn’t be how we are.

The simple act of feeling that you are not granted your basic rights is a step forward. As an indignado, you object. You complain. You make people around you realize that things aren’t the way they should be. And that’s how it starts. By simply recognizing that you, as a human being, as an individual, as a citizen of the country, as a member in society, are not treated that way you should be, is how you become a revolutionary.

By taking the street, your square, your workplace, your friend’s neighborhood, the kiosk on the corner of your street, and openly communicating to everyone around you that you are not pleased, is how ideas are shared and nurtured.

SCAF benefit from making the revolutionaries believe that we are a minority, and that no one else cares. Those who are willing to make big sacrifices for the chance of change in Egypt are a rare commodity. 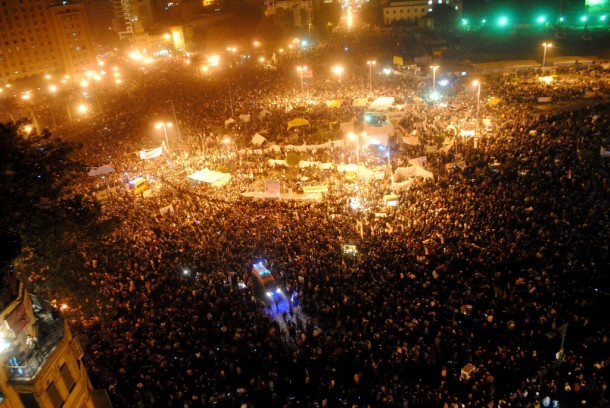 But we are clearly not an insignificant minority. If the Islamist-less Tuesday at Tahrir square during the week leading up to the elections in November taught us anything, it’s that that are millions out there who feel indignados. If the strong wave of labor strikes that hit the entire republic in September and October tell us anything, it’s that millions are willing to take the risk for a shot at freedom and social justice. We might not have clear solutions, we might never agree on a clear-cut plan of moving on from the ‘transitional phase’, but we are certainly united in our belief in the revolution.

When it comes down to it, for the revolution to succeed, we need to be constantly exchanging thoughts and ideas with anyone and everyone around us. We need our communication levels to outdo that of public TV. We need our opinions to be hard louder than those of ‘experts’ on talk shows. We need our videos on every screen, our messages on every cell phone, our words on every corner of every street.

We need to go out somewhere, anywhere, and say it out loud: INDIGNADO!

Thank you so much for this post. It is an important counterweight to the waves of defeatist material appearing on twitter and elsewhere. I hope you will be able to communicate directly with the activists who have so much courage but lack endurance.

Thank you very much! I think it’s important for everyone to continue to spread information and use whatever tools we have access to, no matter how limited, in order to everyone mobilized.

I have to admit I have been on a downer as of late, but I take comfort in the fact that when things seemed doomed for failure, we’ve always managed to bounce back somehow.

Ya Tarek! Good post. Basically, neither SCAF nor the Muslim Brotherhood leaders have solutions for what ordinary people want and need: social justice, real democracy, freedom for Palestine. Of course there are ups and downs in every real revolution. But if the revolutionary left works well, and participating actively in the broad movement and presenting solid and reasoned arguments in the political debates, the tide goes our way.

I learned this by studying the Russian revolution of 1917 (there’s a long article of mine in Arabic translation on http://www.e-socialists.net/node/846 ). Now we can see it in practice all over the place… at least the first part. How it ends depends, partly, on us. Best wishes from an Indignado revolutionary socialist en Barcelona.

David: Moltes gracies! I think the left in Egypt is picking up, but it still needs to organize and mobilize a lot better. I think the key is to allow the people to be exposed to the different angles, then they’ll be radicalized almost automatically.

Hope you don’t mind a brief addition to my earlier comment.
We know the Brotherhood got to where it is only by enduring defeat after defeat. Today, the standard is almost instant success: look how the press kept talking about a stalemate in Libya. When this standard is internalized, it demoralizes

We’ve had enough, and we deserve better

[…] live in misery and think that’s perfectly fine?). The point is to inspire the people to feel indignados. To provoke them to complain. To help them reach the realization that they’ve had enough, and […]

[…] In Port Said I got the chance to bond with Abourgees (don’t worry, his excitement levels remained steadily low – don’t get your hopes up) and I asked him about how he lacks any sort of ‘revolutionary passion’. At first he thought it was normal, since he’s not into politics, and has not interest to debate or make a decision with regards to the authorities. But this was based on the inaccurate assumption that the authorities are at a distance, and that his lack of interest keeps them away from his daily life. So my reaction was, “so you don’t feel indignado?” And I explained to him what I wrote in this post on my blog. […]