Communication, especially voice calls, became an integral part of my experience at the square, and in fact consumed a considerable chunk of the daily routine. It was an activity that tired me out at a time when every piece of energy was needed. While some calls were very important in the process of the ongoing revolution, others, and sadly an overwhelming majority, were a waste of valuable battery life. 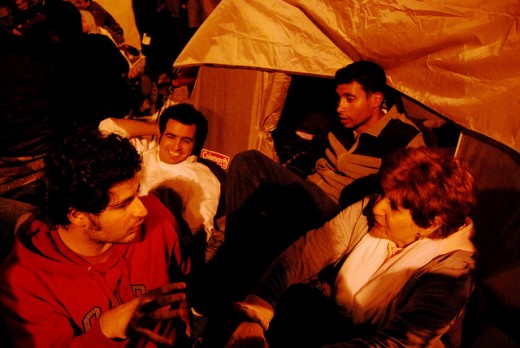 With Hatemation, Waleed and Mom in front of el Bansyon. Photo by Rowan el Shimi

The following are the characters that bombarded me with phone calls at Tahrir square as I juggled between three different phones (only one of which is a smart phone with applications):

Answering calls and keeping up with the communication was a challenge, but a responsibility. A revolution can only succeed when the masses can coordinate and mobilize. It’s a time when information becomes a valuable resource, and even as a renewable energy, it is never sufficient. Technology, therefore, provides the tools which, at this day and age, seem ideal for movements to happen. At the end of the day, however, it comes down to who uses it, and how. 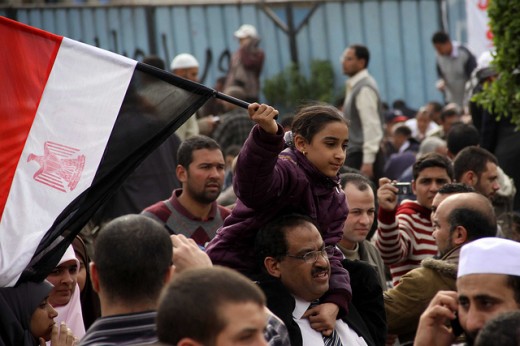 This is a civilization counting past seven thousand years, and proving it’s worth every bit of praise by starting a historical revolution. The Egyptian people are capable of sharing information across space and time like our lives depended on it. Because it did. And we won.

This is, my friends, power to the people.

For me 99% if the incoming/outgoing calls were from/to my friends inside the square, as we tend to lose sight of each other every few minutes.

I would like to offer a slightly different perspective on the first category of “12% outside callers”, whom you describe as “plagued with guilt that haunts them during the night”.

Not sure that’s how I would describe it. I would rather term it something along the lines of “angry/concerned/sad/ecstatic/hopeful/scared/proud/angry/scared/ecstatic/jealous”. Basically an emotional roller coaster that I doubt I will ever experience again in my life. And here are some memories I have connected to these frantic emotions:

Sad because we are so far away from our loved ones, while you have each other to comfort one another. Angry because we have to deal with uninformed people in our day-to-day lives that have NO idea that the most important (to us) events in history are taking place RIGHT NOW. Angry that random colleagues are putting their “two-cents” worth of predictions and saying Mubarak will never step down. FURIOUS at Egyptians in Egypt who are not taking part and even worse, blatantly asking protesters to go home while they lay in front of their computer screens being “bored to death” of staying at home and cannot wait to return to their boring-ass jobs, because they miss “normalcy”. Jealous that you guys don’t have to deal with having arguments on f’ing facebook defending the revolution while it is taking place. Envious that your hopes and dreams are being fueled and protected by the most amazing Egyptians who took the streets every day, and hoping that these dreams will not be crushed once yo realized that half of Egypt were not on our side.

During the revolt, I avoided talking to anyone unless they were Egyptian. And from our conversations, it was so obvious that every single Egyptian abroad had their heart in Egypt and was fighting their own battle from abroad (something that will always bring tears to our eyes just to think about those moments when we curled up in bed with Al Jazeera live waiting for the molotov cocktails to disappear from tahrir). Our lives were put on hold, yet we didn’t have the excuse of being in tahrir and therefore had to somehow still be productive in our jobs.

And on a final note, it seems that every revolution is unique and therefore the outcome can never be predicted. However, what is common to all is that for the revolution to actually take place, many “stars must align” in the right place at the right time. For example, if the media did not show so much interest in the aspirations of the Egyptian people, and thereby filming everything happening in tahrir and every protest taking place around Egypt and outside of the country. Those of us who gathered tens of thousands of miles away from Egypt to show solidarity played a much bigger role in helping topple the regime, than the useless Egyptians in front of their facebook screens telling protesters to go home because the Egyptian economy has suffered enough in the 10 days that Mubarak had already made good-enough concessions…

So if I had to call it something, then it would be an emotional roller coaster and “guilty” isn’t part of the ride…because we knew, if anything, being in tahrir would ease all our concerns, and therefore, it was more along the lines of “envious”.

and of course I forgot to mention SUPER SUPER proud!

Yeah I’m not sure where I fit either… can you create another category for me and the guys at b dental (0.01%)? Thanks!

Noooovi: Thank you very much for shedding light on the ‘Outsider’. Very well illustrated. It’s interesting because as Egyptians on home soil, it is impossible to fully comprehend how compatriots oversees experienced the events.

And just in case you weren’t aware of it, even though you were technically an ‘Outsider’ (and as you explained, shared some aspects), you were very much the steam in the Egyptian struggle.

SouSou: Aywa ba2a ya SouSou ba2a! You were switching roles. At the beginning you weren’t calling because you were at Tahrir the entire time. But then when you had to leave for France, you became ‘Faksana’. Hehe, just kidding. You obviously continued the fight from abroad.

Shalabee-e-e-y-yy: Hehe, the guys at b dental? If I didn’t know you well enough, you would’ve passed as ‘bored and uninterested’. But actually, you were very much ‘steam in the struggle’ in your own way (which is basically following the news, and receiving calls from Novi! hehe).

The post doesn’t take into account calls from mom, and numerous calls to dictate directions to the Bansyon.

This was one of your most enjoyable posts; which is saying a lot; having spent a lot of time with you I have been next to you many times while you have received those non-stop phone calls and I (not a mobile phone fan) have wanted to just take your cell phone and chuck it into the nile many times from the constant ringing hour after hour and I’m not even answering any of the calls so I can only imagine how annoying it is to be actually answering! Keep it up;

Btdub these tahrir diaries should be pusblished in a book or something; I’m sure someone will approach you on that front; keep it up!

and one last after thought on the “outsiders”… The only times I felt slightly guilty were the three times I bought tickets to Egypt (and returned them in less than 24 hrs with no penalty – discovering that was in and of itself emotionally draining b/c I was just constantly buying tickets, and then returning them!). I felt guilty because I knew I was only going for more “selfish” reasons…I wasn’t going to be the heroine who was going to scare the thugs away…I just wanted to be there…and felt guilty about throwing my boss under the ditch because he also has a life that will only be sustained if I continue to do research and eventually publish…also felt guilty for putting robin through constant emotional stress because he would’ve been too worried to be functional, if I had gone without him…

Essentially what Nevsh said. But really dude? I mean… really? It seems I need to come back and discuss some of these finer point with you Mr. Revolutionary.

Journalists were the do-it-yourself enema of the revolution (yes, I said enema, not enemy) that literally made you experience the feeling of voluntarily sticking something up your own ass, but then ultimately feel like you may have done something for the betterment of the short-term. I feel for you. And loathe 43% of your phone calls. It … keeps me up at night.