My Cousin Radwan Detained in Syria

I’ve just received news that my cousin and dear friend Muhammad Bakr Radwan has been detained in the Syrian capital Damascus following Friday’s demonstrations and accused of espionage. His latest tweet came during the early afternoon on March the 25th in which he indicated that he was at the Umayyid mosque in downtown Damascus witnessing tension. 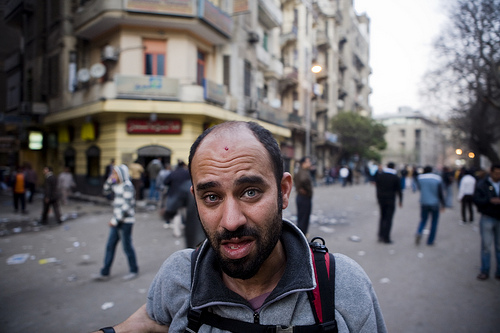 Syrian newspapper Sana later reported that he has appeared on Syrian TV declaring that he has indeed received money from a Columbian journalist and is in fact collaborating with the Israeli intelligence from within Damascus.

Needless to say, this is all a complete falsehood, as he is an engineer working in a family business office for about nine months now and spends substantial time in Cairo. He is also a frequent traveler who had spent about a year backpacking through Central and Latin America, and therefore carries a passport with many visa stamps.

Radwan, as he is known amongst family and friends, holds a US passport, along with his native Egyptian one, and grew up between American compound Aramco in Saudi Arabia and Cairo, before moving to the US for high school and college. Upon graduating from Texas A&M University, he spent a few years working in Saudi Arabia before embarking on his Latin American adventure. He then spent a few years in Egypt and has only recently taken on a position as head of his family business’s branch in Damascus, specializing in data analysis for petroleum mining in the immediate region.

Radwan’s our second cousin and a very close friend who was extremely active in the #Jan25 revolution in Egypt, accompanying us on a daily basis and spending extensive hours at Tahrir square.

The Arab dictators fail to learn from each other’s mistakes and are resorting to old-fashioned techniques in an attempt to shoot down our revolutionary spirit. Little does Bashar el Asad know that he has only made it worse for himself, and together we will be victorious and liberate ourselves from corruption and brutality. Radwan will soon overcome what is but a minor bump in the road of a revolution the Arab world deserves. Y hasta la victoria, siempre!

a7a ya bibbles! please let us know if there’s anything we can do and if there are any developments!

please call aljazeera and other media and let them know and spread the word. for his sake and for syrians!

What are you, some kind of international spymaster? The people you know, an Al-Qaeda fighter in Libya, an Israeli agent in Syria, what’s next, an Iranian terrorist in Bahrein?

I’m sorry for your cousin, I hope they’ll let him go free as he deserves…

[…] Shalaby’s brother, Tarek, explained in a post on his blog that Mr. Radwan’s international upbringing and interest in travel is now apparently being used by […]

i am so sorry about your cousin. he is a good friend of mine and please keep us updated on any news about him.

Sorry for your cousin but the guy is a bit crazy. Let the Syrians deal with their own problems and busy yourself at working for a better Egypt. If the guy thinks he can BOTH be a revolutionary and work in an oil company for the Saudis, he certainly misses some connections in his (scientist) brain. Basically he has a US passport, worked with a Saudi-US company, studied in Bush’s governorate, and traveled in South America but everybody should understand he is a pacifist and admirer of Che Guevara. I am not sure police and army people are that smart. Would he be demonstrating if in Kabul or Baghdad ? There have been plenty of demonstrations recently and many killed without al Jazeera or you guys bothering.
Your cousin certainly knows that foreigners in Cairo, even people living there for years, have been detained and their computers confiscated even after Mubarak was officially down, so what did he expect in Syria? It’s a country with millions of Iraki and Palestinian refugees, who have cousins with weapons all around. And with permanent interference of the Saudis who are happily exporting their extremists abroad to get rid of them and stay in their royal palaces. So try to be logical and start from where you should start, because as we have seen we cannot expect Al Jazeera to cover Saudi Arabia and Bahrain (as they didn’t also for the protests in Khartum).

Hey, this is terrible – is there anything we can do? I guess the more we spread it, the less they can do or am I being naive? Please let me know if I can do anything, I am very sorry about this!

It’s very interesting for me to see you judging Radwan for where he was born, where is works and what he does and making it sound like this was his fault and not the Syrian government trying to create propaganda.

If you have something supportive to his family or a constructive suggestions do share. If not, I suggest you practice a little bit of sensitivity to the situation at hand and keep your judgments to yourself or publish them elsewhere.

Any one that knows Mo knows how absurd these accusations are. He surely is a peaceful activist there is no doubt about that but he acts for humanitarian reasons and is not a spy. I feel badly for his family. He’s a good guy spread the word, let the fella go!

I met and have known Mo since he was at A&M. He is absolutely not a spy. If there is anything I can do besides spreading the word, let me know.

The Syrian government is sure doing a great job dealing with its problems, isn’t it? Mo’s a great guy and doesn’t deserve this. It’s ridiculous.

@ Rowan i got Ur point and Ur totally correct,i know Mohamed very much and he is not a spy at all,he is a victim because the government in Syria want to make a problems,its ridiculous. Mohamed u r a great man and sorry no democracy in the Arab government.

This is so unfair! he has to be realeased!

I’m afraid I don’t see how Al Jazeera’s failure to cover events in Saudi Arabia and Bahrain undermines calls for freeing a man who was wrongfully accused and detained because of his presence in the wrong place at the wrong time, and then made to spew out outrageous lies on State TV under god-knows-what-kind-of-pressure from the Syrian security.

Your argument is ridiculous and your defence of the Syrian regime is deluded and self-contradictory (if you’re asking me to sympathise with a brutal dictatorship on the grounds that “come on they’re just trying to protect their own asses”, you would have done the same if you were in their place”, then excuse me if I scoff), but aside from being ridiculous it is also irrelevant. Even if what Radwan did (or what you think he did) was borne of misjudgment, are you asking his cousin to ignore his plight because, apparently and according to your enlightened analysis, he deserves it? You might have noticed that the purpose of this post was not to propel the Syrian revolution, but rather to inform about the unlawful detention of an individual and try to mobilise action for his release.

[…] of Egyptian-American Muhammed Radwan in Syria under espionage charges here. His cousins Nora and Tarek Shalaby also share their thoughts. […]

Someone should please translate the entire material. It helps all causes to document as best as possible. Translating means easy access for non-speaking of the arabic.

I heard about your cousin from @beleidy on Twitter, and was wondering whether some additional publicity might help. I have just started a site: http://thefacesofcourage.blogspot.com that will highlight prisoners of conscience.

If you think some additional publicity would help your cousin’s case, to bring his situation to more public attention, I would like to add a photo, brief information, and a link to your blog.

If you don’t think it would be helpful, that’s fine too.

I would also be happy to blog about this issue on my personal blog, http://www.gallerielyonesse.com and put a link to your blog for people to continue to follow this story.

My prayers are with your cousin, and all of his family. Be strong, and hopefully he will be released soon.

I really hope M. Ridwan will be freed soon, but still I think US citizens are the last people who should mess around demonstrations in the Middle East.
If he is an activist, he should try to provide people out of Syria with texts and interviews of local people explaining what they want for new system. Tunisians and Egyptians were very politicized and made their propositions heard and clear. Syria is not North Korea, as many in the mass media would like to depict it, and it is pretty easy for any one politicized to write about his aspirations and publish it through contacts in Lebanon, Turkey, Egypt etc.
What makes me uncomfortable is that most people on Twitter who are supporting from their coach in the US the Syrian revolution are sending links to salafi website, and post on pictures that are actually from a few years ago (read Sultan Qassemi for real information).
Another problem is that not everybody who went to pray friday’s prayer at the Umayyad mosque intended to go to a demonstration: lots of Iranian tourists and local people who didn’t have any idea that some people would raise their voice against the regime (which i didn’t defend, i think, by comparing it to the situation in Baghdad and Kabul…)
So if a foreigner then publishes pictures of the Umayyad mosque saying that all these people went to an organized demo, that’s simply not true.
I would rather read about the aspirations of the people. End of corruption is not achieved in the West. Guantanamo is still open, and the guy who passed the Wikileaks information is still in solitary confinement. It is a global reform we need and some people are working at it by exchanging ideas. Naomi Klein, Chomsky, Azmi Bishara are among them. But Marx wrote his manifest 50 years before any revolution started in Russia against the Tsar. So revolutions are not just clicks with a mouse.

It has been a huge shock for me to see that on the news (You do know that the Syrian News is pretty much like your news at the revolution times) .. I have followed you, your friends, and Pansion el 7orreyah on youtube along your stay in the square, so the absurdity of the story the government told way was beyond human respect !!
Please accept my congratulations for his release, and please tell him that we, Syrians, are not all like the couple of people who detained him.
Please wish us luck to breathe the same air you did on 11-2-2011.

N.A.K: Thank you very much for your support and kind words. We are very aware that the dozens in power do not represent in any way the beautiful and humble people of our beloved Syria.

I hope the revolution we’re going through can help the Syrians learn from our mistakes and reach an even better success. We are brothers and sisters separated by corrupt regimes and brutal dictatorships that are very aware that, when united, we are much more powerful than they ever will be.

But don’t worry, together we will reach victory and live with the freedom that we deserve. Hasta la victoria, siempre!

Dear all,
My goldbugs friend Khaled Magued al Ghayesh vanished on March 26th in Damascus. We have not received any news of him till this date.
Khaled was in a weekend trip to Syria and was last seen by his Syrian friend in halab getting on a bus to Damascus. Please help us with strategies used to get Mohamed Rdwan back