In the days leading to the National Police holiday on the 25h of January (the very unwelcome bank holiday that was introduced last year), there was talk about demonstrating against the police (and people actually bothered to give reasons, as if we needed reminders). As always, I was planning on taking part, but was not very optimistic. I remember I had a lot of work to go through that day, and thought I wouldn’t be able to dedicate more than an hour for my duties as an Egyptian citizen.

My friend Ali Azmy popped in at the office and his excitement was enough for me to cut my meeting with the developer short (and subsequently leave him in a state of confusion) and prepare to take the streets. It turned out that Bambuser, my preferred app for broadcasting live videos via my Android phone, was censored. The idea of not having access to a website or service because the government doesn’t fancy it was (and perhaps still is) beyond me. With little time to act, I download and installed Qik instead. We headed out of Iran st and made it to Dokki street just in time to merge with the group marching from Mostafa Mahmoud mosque. 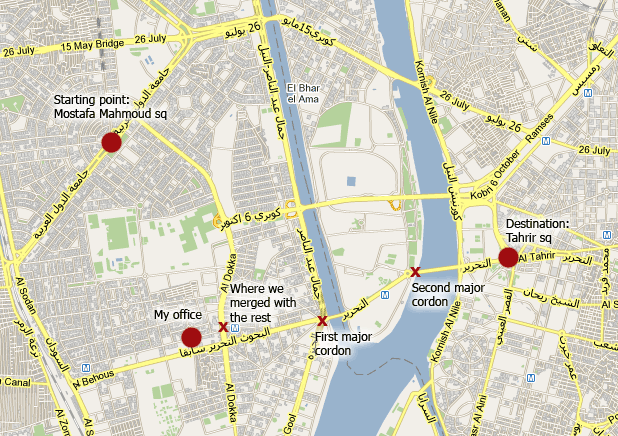 Map locating the points of action

I’ll never forget the shock of witnessing thousands of protesters march towards us, certainly beyond my most optimistic predictions. That’s when I felt we were going to be part of something big. I sent out a few tweets and managed to take some pictures to demonstrate the magnitude of the presence. The group grew further as we approached Galaa square. 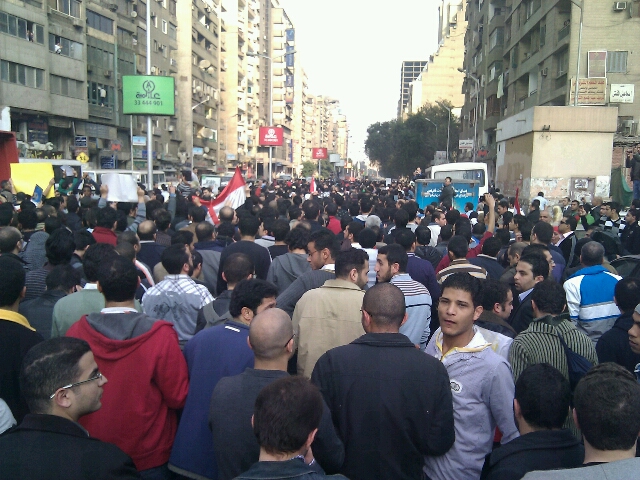 An impressive turnout on the 25th

We came across the first cordon crossing Galaa bridge, but the tear gas bombs didn’t start popping until Kasr el Nil. Tahrir square was the battlefield for the night, and I was trying as much as possible to stick to my friends. I continued with citizen journalism and broadcasted a handful of live videos, including the following, which was picked up by CNN:

By 4 or 5 pm making calls was not possible, and sharing photos, videos or even simple text tweets was a fantasy. I spent considerable time with my friend Hazem Zohny and my sister Nora Shalaby. And the highlight must be chasing the security forces down Kasr el Eini street as they retreat. The downside, however, is that running away from them is not fun at all.

That day was when I first heard the powerful, effective chant ‘al sha3b, yoreed, esqaat el nezaam’. I must’ve run into dozens of friends and colleagues at Tahrir square, and it was refreshing, to say the least. The atmosphere calmed down for a few hours, and I signed off at 8.30pm to get back to work.

The sandwich guy from Shehab street

On the morning on the 25th, I walked out with Nora to scout the Mostafa Mahmoud area to get a sense of the security preparations. On our way to Gameat el Dewal st. we made a quick stop at the guy on Shehab street that sells cheese and eggs sandwiches from his bicycle. We had a chat with him and told him that we were going to join the protests later. His response was that of political apathy and mild interest in general. What would you expect from someone who struggles to raise enough money to pay for his basic needs?

In one of the runs away from the security forces, and completely out of the blue, we come across the sandwich guy! At such an action-packed scene, there was no room to engage in a much desired conversation, but it was a sheer moment of joy for my sister and me. Regardless of the reasons behind his participation, we felt honored and proud (not to mention surprised) for living this story.

It was all uphill from there

As much as it was a tough experience to go through, especially given that I consumed significant amounts of tear gas for the first time, it was definitely a clear sign of good things to come. From the moment I got back (to the office), I was already thinking about taking this to the next level that Friday.

A couple of days later, my friend Heba el Sherif sent me a Hollywood-esc photo that she took of me: 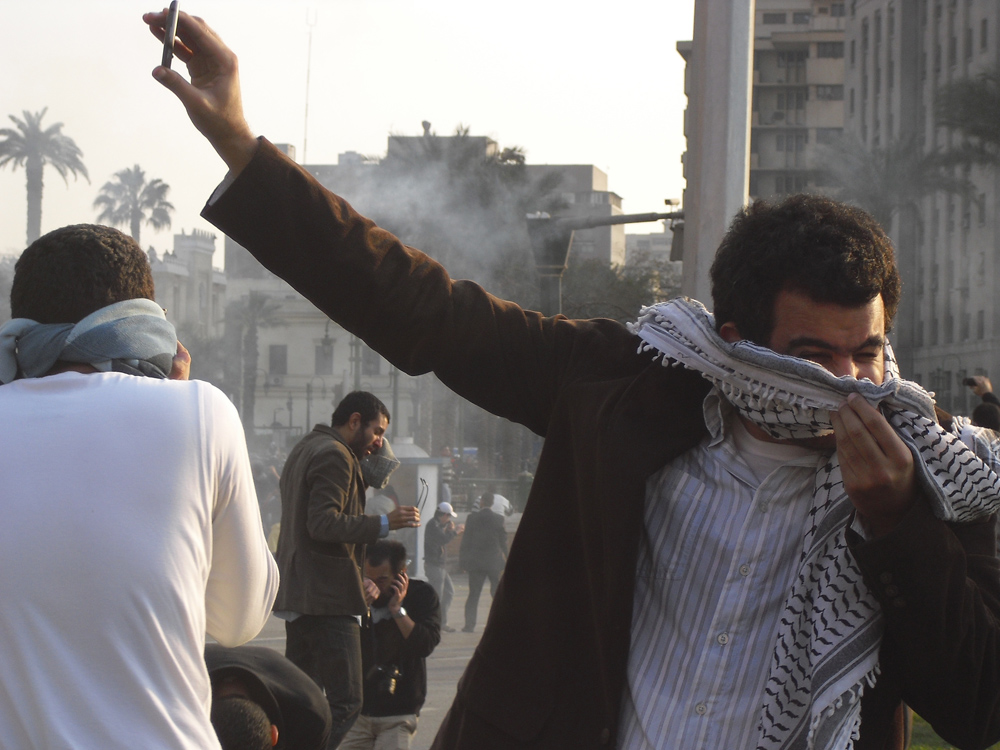 That was the day the revolution started. That was the day the Egyptian youth stepped it up to fight against Mubarak’s corrupt regime. It was that day, the 25th of January, that Egypt, the Arab world, and indeed the entire world, was in for a drastic change. And I was lucky enough to have taken part. I will always remember that day as the birth of the revolution that gave life to Egypt.