Words will never boast the capacity to describe the emotions of a revolution. A revolution that toppled a brutal, corrupt regime after three decades of struggle. Each and every one of us has lived and contributed to overhaul the government in his or her own way, and we have the web to thank for allowing us to share this ever-growing content freely.

After participating religiously throughout the entire period leading to Mubarak’s resignation, I wanted to put together a series of blog posts to illustrate as much as possible my experience with the revolution. Instead of going in chronological order, I thought it would be more interesting, and indeed easier for me, to break it down to different topics/aspects of the two-week period I spent camping out in Tahrir sq. Whether it’s the daily routine, the people I interacted with, or how I got electricity installed at ‘Bansyon el Horreya’, there are many angles to the story, and I’ll try to stitch them together. 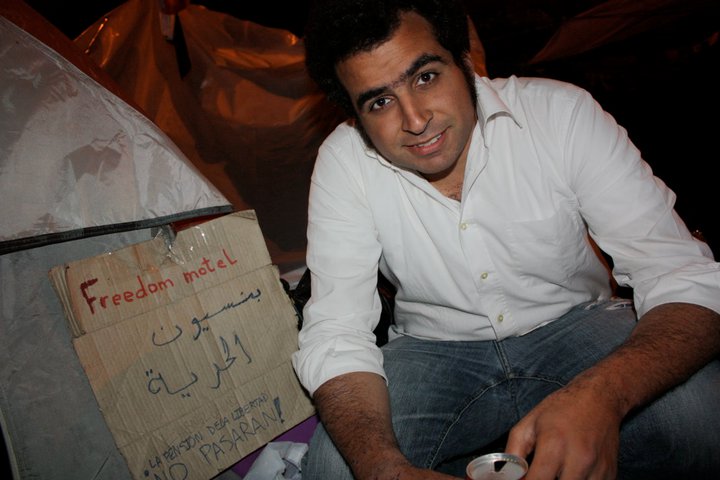 So here’s to the revolution that’s the first of its kind, and hasta la victoria, siempre!

Tweets that mention This. Is. Egypt. | Tarek Shalaby -- Topsy.com

hey tarek, i have been following u by twitter by pure chance. You were taking off to BenGhazi at the time and i remember thinking this is where i want to be. Then I came across your blog and thought this is exactly where i would’ve wanted to be (i live abroad and only got a chance to be in Tahrir for 4 days). from a fellow self-proclaimed bohemian to another, i raise my hat to you and tell you you’re one hell of a guy. love the spirit, positiveness and pro activity. keep it up and keep us posted.

Thank you very much for your kind words of inspiration. I’m moved and excited by such overwhelming support.

It’s beautiful to see the true bohemian spirit ‘go viral’ and push us all to gift the world with a better Egypt for everyone.

[…] Tarek Shalaby and Free Mosa’ab Elshamy. (For more on their parts in the revolution, see the Tahrir Diaries series on Mr. Shalaby’s blog and the Egyptian Revolution galleries on Mr. Elshamy’s Flickr […]