When Old School Propaganda Fails To Be As Effective

As brutal and corrupt as many governments can be nowadays, some are oblivious to the fact that the Web empowers the people beyond control. Dictators like Robert Mugabe of Zimbabwe, Teodoro Obiang of Equatorial Guinea, and Hosny Mubarak of Egypt might like to think that they rule with an iron fist that is virtually impossible to dismantle. While that is certainly close to the truth, little do they know that their technological incompetence and their underestimation of the power of the web is a potentially serious threat.

Egypt, for example, has opened up the press freedom over the past decade, which has encouraged a number of independent newspapers to take the stage. That, along with the exponential technological advancements that the world as a whole has experienced, has left the government thinking that perhaps it has bitten off more than it can chew. In the 80s, the three main papers were all governmental, and any story shared between the three, regardless of it authenticity, become true to the masses. Not only that, but propaganda posters and cartoons were highly effective.

After the horrific sectarian clashes in the south of Egypt, the entire Egyptian blogosphere was talking. Twitter was on fire. Facebook was flooded. And the blogs discussing the issue were scattered all over. That is when Al Ahram, Egypt’s main government-run newspaper, decided to weather the storm. Besides the fact that their website, when it actually works, looks like cow manure reshaped to fit within a computer screen, their approach was older than the president himself: 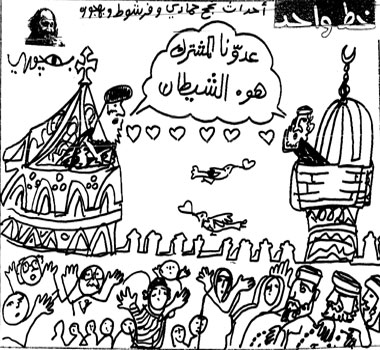 The “illustration”, which seems to have been scribbled and slapped together by a six year-old with mental illness, depicts the happy Egyptians together celebrating peace and prosperity. A Muslim coming out of a minaret shouts out simultaneously with his Christian counterpart standing on a church tower, “our shared enemy is the devil.” If that’s not enough, the “doves” in between are carrying hearts back and forth to imply unconditional love exchanged by all the peoples. The worst part of it all is that it’s not a joke – Al Ahram genuinely thought they would indirectly fool the crowds into believing that the all is well at the land of the Pyramids.

20 years ago, the cartoon could’ve stood a chance. Now, it could only make matters worse. The main reason being that with access to unlimited and uncensored information between the different people across space and time, old school propaganda has become ineffective. People no longer fall for the idealizing images of brutal dictators, nor photographs of happy citizens enjoying life. Not only does it need to be far more sophisticated, it also needs to be significantly more convincing. After all, there’s a lot of competition, and the web is anyone’s to create and share.

Dictators with over a quarter of a century under their belt might feel safe, but few have hopped on the fast-track trail of the internet and are therefore are not in as much control as they would like to think. For that reason, along with education, health care and infrastructure, internet access should be one of the aspects in the developement of over-exploited nations. Since effective communication is key to any change, the web is absolutely crucial in connecting the people and giving them the power they need to gain equality and justice.

The web has been, and will always be, power to the people – nothing can take that away from it.

The good thing is that amazingly, most of the ‘al-cia-da’ propaganda and the israeli mossad propaganda (one and the same, more or less, both take their orders from TEL AVIV) is being called out for what it truly is.

people are googling the name ROTHSCHILD. seeing what they are.

the term AIPAC, the acronym for the zionist jew control of the congress and senate, is no longer something that stymies people when you ask them who and what they are.

in general, the FAUX NOIZE idiots are waking up and finding they’ve been aggregiously and hideously lied to for as long as they can remember.

unfortunately, this new bastard and puppet, Obama, is pulling a Joseph Goebbels now and has a czar that wants to rope in anyone who questions the lies and the bullshit in AMERK’A! How quaint, you scumbag neofascist bastard, BHO!

As much as I would like this to be true, I don’t agree.

Twitter is still irrelevant when it comes to public opinion in Egypt. There are probably 2000 or 3000 active accounts, only a percentage will discuss politics. In reality Facebook is still the king. Very few of my non-activists and Christian friends shifted their interest from Farmville to discuss what happened in Nagaa Hamadi. And if there were some attention given to the shocking events it was certainly short lived.

Don’t get me wrong the web is empowering and everything for people who are willing to talk about things that matter. People aren’t talking with the same zeal as the Algeria-Egypt football row and this was clear evidence that they still can be easily charged by government propaganda.

Obviously the Internet still has a long way to go before everyone has constant, unconditional access to information worldwide. But despite the young age of the web, it only takes one person to have had contact with ANY means of technology to communicate a different perspective to a group of people, hence making a difference.

Technology won’t convert people into intellectual, socio-economic analysts, that’s true. But it facilitates it to a large extent. So if people still use Facebook for games, as oppose to communicating and discussing the different social issues, then it’s a problem that technology alone cannot solve. Having said that, it does give us access and exposure.

For example, in Upper Egypt, even the most humble of farmers has a made-in-China phone with a ton of options. Most notably: Bluetooth, GPS, 3G, SMS (obviously), and occasionally TV and Radio. This makes accessing and sharing information a whole lot easier.

It only takes a minority of internet users to bring a different perspective to debates with others. That’s how it always starts, by the time everyone’s fully on board, not even the most sophisticated, well-planned government propaganda campaigns will have any effect on us. Thus, power to the people.

i agree the internet is an incredible thing – but there is something to be said for the potency of regular old-fashioned propaganda – most excellently demonstrated in the recent swiss minarets campaign. the poster was extremely effective.

an article i found through arabist.net on the nytimes website (http://www.nytimes.com/2010/01/17/arts/design/17abroad.html) discusses exactly that.

it seems that the tv actually helped spread and increase the popularity of these posters – when they kept showing it and asking “should we allow these images?” (so basically free advertising for the party)

the designer behind the posters actually says in the above article: “We’re successful because we know how to reduce information to the lowest level, so people respond without thinking.”

and he adds that:

“The message must go straight to the stomach, not to the brain, and connect with specific emotions involving fear, health, money, safety. We can focus just on our target audience so we can speak in a special language and speak to a feeling these people already have. We can’t move anyone who doesn’t already have this feeling. In our case the target audience is low income, with little schooling. They have the same right to vote as people who support the Green Party and read 3 newspapers and 10 magazines.”

it’s a good article on what design can do.

See now this brings up another notion to consider. Old school dictators ARE becoming a thing of the past. But there will come a day when they pass the mantle onto some form of a successor. Now that successor (whomever it may be) will be internet savvy or at least aware of the existence and potency of the good ‘ol information super highway. This notion is scary to say the least. A dictator that can control the internet is probably the closest thing to a sentient computer software that decided to rule the world a-la terminator’s skynet for instance. Now I dunno why most current world leaders (dictators or otherwise) aren’t that technologically capable. The upcoming ones will be though. And then we’ll have to deal with more restrictions on freedoms. My advice is start developing a liking for bread and halawa.

When the web empowers the people, and ignorance hinders the government | Tarek Shalaby

[…] few months ago I wrote a post about a disgraceful cartoon published in Al Ahram right after the sectarian clashes in the south of the country. Traditional propaganda, it seems, is […]

[…] When Old School Propaganda Fails To Be As Effective | Tarek Shalaby […]