Out of Adobe’s undisputed Fab Four on any web designer’s desktop (Photoshop, Illustrator, Flash and Dreamweaver), the one specifically for HTML and CSS is probably the most threatened. Indeed, replacing any of the first three is almost an impossibility (see my post on GIMP’s attempt to overthrow Photoshop). Finding an alternative to Dreamweaver, however, has become more of a reality.

And why not? After all, when you’re cutting up the design, laying out the XHTML, and writing up the CSS on your framework of choice (see my reviews on the 960 GS, Blueprint CSS, or 1kb CSS Grid), you don’t need an application for rocket science. The main reason why many designers stick to Dreamweaver, as oppose to opting for any of the open-source alternatives, is because a) it tags along other essential Adobe products in a Creative Suite, and b) it boasts some neat features. However, it remains an over-priced product for a relatively simple task.

In comes Coda: a web development application that brings everything you need in a single window (Mac OS X window, that is). Firstly, at $99, it’s not the priciest of applications, given that you develop websites professionally. More importantly however, it packs some top-notch features:

The most important aspect is that it’s sleek. The interface makes you feel very comfortable as you’re creating color-coded magic. Doing everything locally is a breeze, and then editing remotely on the fly saves a lot more time than running around your FTP client and temporary text editor. Its performance is also more impressive than its Adobe counterpart. 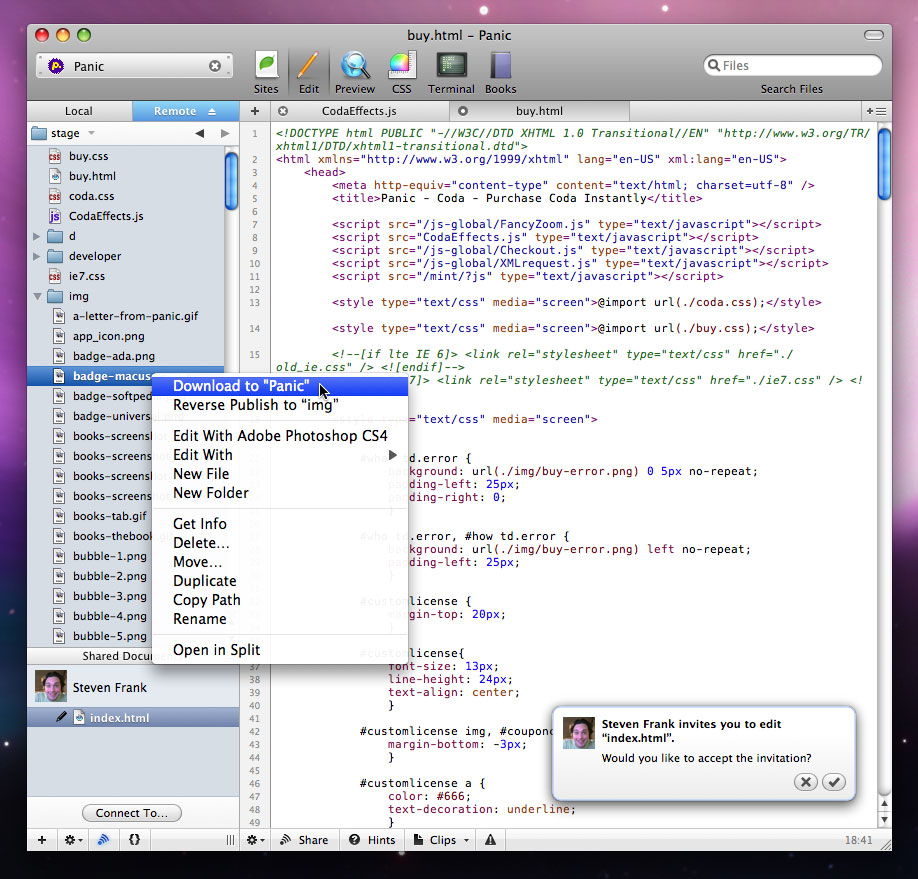 FTP on the left sidebar, colored code in main area

The biggest disadvantage must be in its price tag. Even if it is cheaper than Dreamweaver, thus making it the clear winner, it is still $100 more expensive than the second best open-source option. When the likes of Aptana Studio learn from Panic’s baby and step up their game, then no one will have to pay anything to live a proper web development experience. Until then, we’ll take the money out of our savings. My condolences to Adobe Dreamweaver, you were great, but now it’s time to move on.

i was really excited reading along until i hit the $99 price tag – which as you mention is far from the exorbitant prices of adobe software but still makes me cringe. on the other hand though if it is good software perhaps it’s worth paying for (although ubuntu is good, gimp is ok – and both are free).

i was on a friend’s mac powerbook who wanted a dreamweaver like program. i eventually downloaded Nvu ( the only open source thing i could find for macs) – but you mention aptana?

mind you i know very very little of this stuff in the first place but am always happy to learn about and use/try out software that provides an alternative to adobe.

I have been suffering with Dreamweaver and Cyberduck for a really long time now. Both of which are memory hogs by the way. Coda is awesome!

I recommend it to all hand-coding web developers!

I really like how it’s straight and to-the-point. If you play around with the ‘sites’ feature, you’ll love it! It’s the best way to connect and edit the files on a remote server, and easily add (upload) files to the remote directory.

It’s one of the few times when I feel that the makers of a given application actually deserve the fair price tag they’ve asked for.

On other hand, Taha, if you were to work with Ubuntu, then the standard BlueFish editor is a REALLY good option. The problem is a couple of things: It’s built with JAVA (as far as I can tell) and is therefore a bit sluggish. Moreover, I’ve failed to install it on my Mac, so I’ve resorted to Coda.

In all cases Adobe’s Dreamweaver is dead! Too expensive and heavy.