I’ve repeatedly expressed my frustration by Arab websites on the internet. Whether it is the poor design, the useless content, the confusing navigational systems, or the obnoxious ads that bombard the screen, the possibilities for disappointment are endless. However, there seems to be a bit of light at the end of the tunnel, as some exceptional Arab web designers and developers are making significant contributions to the Web. One of the latest and most impressive products is Mo3jam.

Mo3jam (pronounced moa-gem) is Arabic for dictionary, and that’s basically what it is. Only the website is community-run allowing users to enter Arabic words and expressions, with their explanations, from the different dialects across the Arab world. It was created by a Saudi from Jeddah by the name of Abdullah Arif who runs Blachan Lab. The aim is to properly document the differences that place the growing gap between the Arabic spoken by the different countries, and what a better way to do it than to allow the people to share the knowledge themselves? 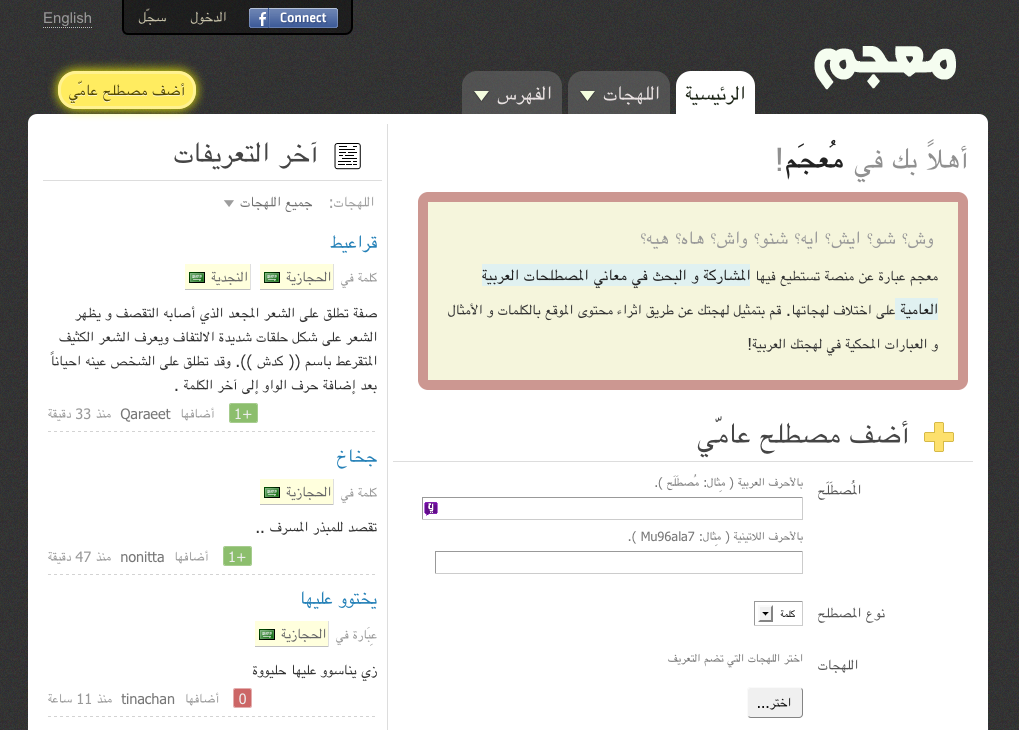 Firstly, the idea of documenting the Arabic dialects is pure genius. While there are many that live in constant denial believing that the spoken Arabic across the 22 Arab countries varies slightly from one nation to the next, the majority of Arab speakers realize that since the spoken language broke off from the written classical version many years ago, each group of people (even within countries) have inevitably evolved in a separate direction. Even though communication remains relatively easy between Arabs of different backgrounds, there hasn’t been official documentation of the dialects. Ideas are a dime a dozen, it’s walking the walk that counts. That is precisely what Mo3jam has done. Taking advantage of the power of the Web to document languages is pure class.

Secondly, the internet has taught us that user-driven content is much more successful than what is produced by the different corporations. That is why websites like YouTube and Wikipedia have quickly become amongst the most visited. Set the stage, and let the users act. Mo3jam has provided the necessary tools to easily add content for everyone to access, leading to the inevitably exponential growth of the user base, and hence the quantity and quality of the content provided.

More importantly, the web application is designed with a creative, professional touch. It looks very sleek and modern. It is also light-weight and extremely easy to use. Without an impressive front-end, success would’ve been limited. Fortunately, that task has long been checked off the ToDo list.

The following are the features in a nut shell:

In conclusion, while it is still in the initial phase and needs to be refined, Mo3jam looks excitingly promising. It might just be the one tool that could help place the Arab world on the Web 2.0 map on the one end, and help the Arab themselves document the complicated dialects for everyone to benefit from, on the other.