In an earlier post, I talked about what Twitter was originally made for, and what has become of it. Since the recent Twitter boom has reached all corners of the globe, and on many levels, there have been many third-party products and services introduced to the market to facilitate and improve the tweeting experience. After all, when you are following 4,000+ people, it is almost impossible to keep up, and it consequently becomes a bit of a mess. One of the most commonly used tools by hardcore tweeters is TweetDeck, an application built on Adobe’s AIR providing the user with a much more efficient interface for accessing and participating in the Twitter globe. 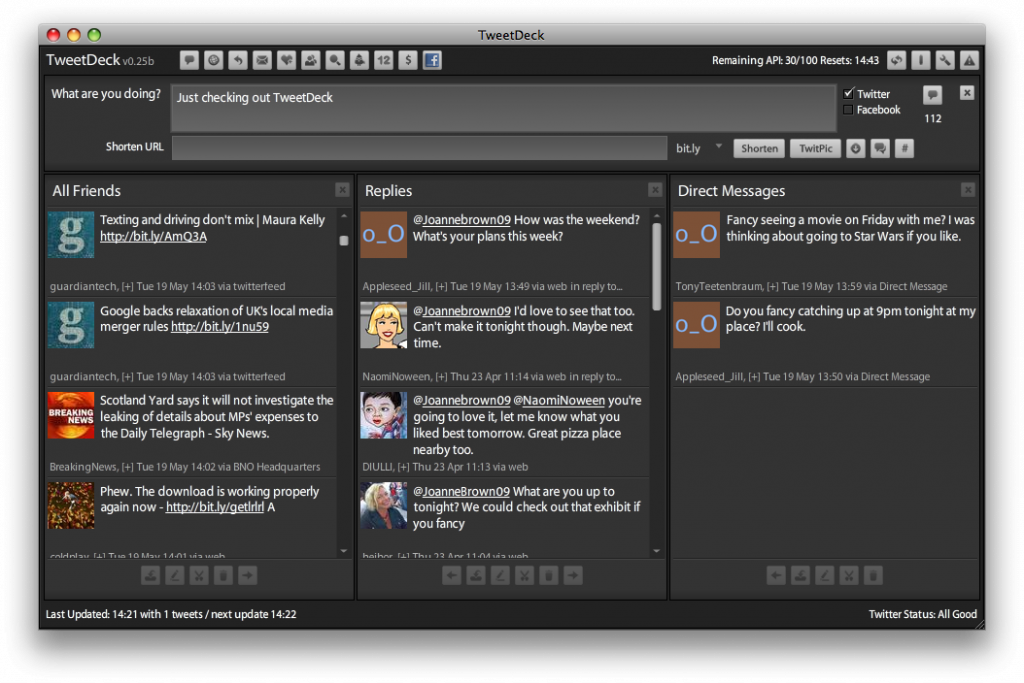 TweetDeck could be seen as a dedicated browser, where there are different columns showing tweets, mentions, messages, etc. Therefore, from a single screen, you can view many tweets at the same time. After that, you have the ability to add your own groups, which is ideal for friends, family, or special interest groups. For example, as a web designer, you might want to place your favorite designers in a group to have their own dedicated column. This way you are sure not to miss their tweets, and can easily browse through them. In fact, there are many features that come into play, most notably:

It is obvious that there was a lot of work put into the application, it seems to offer everything a twitterer would need. However, as always, there are a couple of aspects that could use some improvement:

Overall, TweetDeck is a free application that runs on any operating system (since AIR can be installed on Windows, Mac OS or Linux, any AIR application will natively run on either one of them), and is an essential tool for anyone who takes Twitter seriously. After using it for a while, you will come to notice that without a tool of the same caliber, it is almost impossible to fully take advantage of the service. And as an application still in the beta phase, its future is very promising.

UPDATE: You can indeed follow or unfollow others easily via TweetDeck. If you hover on the person’s image and then click on the “other actions” icon > User,  you can make the choice from the menu. Thanks to @idesignstudios for pointing it out. However, you’ll need to click on your own name from a tweet to see your profile/summary. Moreover, in order to find people by name (as oppose to by #keywords), or to see who’s following you, you’ll need to visit the Twitter website from the browser.

[…] at the integration of its services with millions of products from the open-source community. I have previously discussed TweetDeck, which allows you to efficiently utilize the Twitter service (and for that matter, you can check […]

[…] and organize your tweets easily. Usually very customizable. Example include TweetDeck (which I have previously reviewed), Nambu, and Seesmic (which I take a closer look at […]