If you are in any way related to the design and/or multimedia realm, chances are you heavily rely on a handful of Adobe’s products. In fact, even the regular users with minimal technical knowledge naturally run applications such as Adobe Acrobat Reader, and more recently, Rich Internet Applications built on AIR. There is no doubt that with the acquisition of Macromedia in 2005, there has been very little competition in the different areas of the design and multimedia industries. 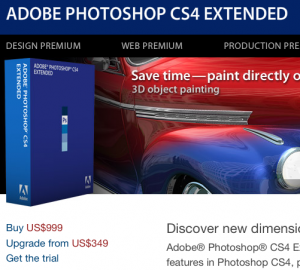 Any web designer in particular is likely to be fully dependent on Adobe Photoshop, Adobe Illustrator and Adobe Flash, the later of which is by far the biggest gain from the Macromedia acquisition, as it brought the entire RIA industry into Adobe’s playground. As a freelancer, it only makes sense to purchase those applications, right? Well, with a total price tag of an incredible $2,300, it is of little surprise that the majority look to work around the hefty asking price. Sadly, millions of designers and web developers world wide rely on illegal copies of Adobe’s main money-makers, and it is not difficult to see why:

While there are many companies across Egypt and the Arab world that run bootleg copies of professional software, such an act is almost unheard of in the developed world. You’re very unlikely to be working for a design agency in the US, for example, and find that the Photoshop on your work computer is cracked or has by-passed activation. However in Egypt, for example, in the biggest ISPs and web development companies, it is common to see your colleague walk in with the good news that he or she has gotten a cracked version of the new Illustrator that has barely just come out in the US. A couple of hours later, everyone at the office is talking about their first experiences with the new product, after having made more copies for their personal PCs at home.

Adobe is clearly very aware of the situation. They know how over-priced their products are, as well as how easy it is to crack them, and how common it is to get a hold of illegal copies. Nevertheless, their strategy is to allow individuals to get their goods for free, students to grow up using them at close to nothing, but for companies to pay the full price. The idea is to have everyone addicted to them, and then force companies to purchase the licenses, because their designers are not willing to use GIMP, which would’ve saved loads of cash.

This all makes sense until you being the foreign companies into the equation. With thousands of agencies world-wide running illegal copies, Adobe is missing out on the chance to make much more profit. The theory would be that, just like anti-viruses have become significantly cheaper over the past 4 years or so, encouraging even the most loyal of software thieves to purchase original licenses, Adobe’s price reduction would help bring legit customers on board. If Photoshop, for example, was priced at $350 with a free upgrade, the number of legit users would at least triple. Even if you’re starting up your own agency or freelancing for the first time, that kind of money is recovered with the first project, and you get to match the newest version when it’s out. After that, they could make it more challenging to crack it (acknowledging that it is impossible to completely end it). Thus, many more people would not see it worth the hassle to skip the fee payment.

Judging from the progress over the past few years, it does not look like Adobe will rethink its pricing scheme anytime soon. However, they are clearly on the losing end as their bizarre price tags are encouraging millions everywhere to get a hold of them illegally, while many foreign companies will do the same, knowing they cannot get into trouble. Either way, besides four or five of their applications, Adobe’s programs have been defeated by open-source alternatives a while back, and the current survivors will soon follow.