Although forwarding seems like a trend from the 90s, there is still a large crowd that constantly sends irrelevant, junk email to all names in the address book. Everyone share’s the troubling situation, and getting out of it is not as easy as one would hope for. Some people have email addresses that are specifically for receiving waste-of-time emails, but then you are left with the problem of not knowing who’s who in the constant-forwarding game. Besides, having more email accounts is incredibly inefficient – everything should be centralized. 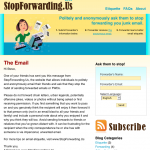 The people at StopForwarding.Us came up with the clever idea of offering the service of sending an anonymous email politely asking the abuser to stop sending chain letters and insignificant forwards. They do so by sending a carefully-worded email named after the person of your choosing politely asking him or her to refrain from the irritating act. That should successfully send the message across, without causing any awkwardness or drama.

Apart from the fact that it is quite humorous and entertaining, it is yet another example of the how the users of the internet are always offered new services for free thanks to the large-scale demand on one end, and the creativity of those who strive for it on the other.

very nice website , i was surfing it , gorgeous , well done , just wanna n just notice you about the link in ur article its missing the h ot http