Taking into consideration the significant gap separating the two countries in terms of economical power and technological development, Egypt seems to be exceeding expectations and providing some serious competition. In fact, the land of the Pyramids was one of the first countries in the world to offer free dial-up connection nation-wide. And just as you’d expect with any new technology introduced in the market, the prices start outrageously high, and then calm down to reach logical levels. With broadband (or ADSL, as it is referred to in Egypt), it was no different.

What is shocking is the difference in prices for installing and subscribing to a broadband connection at home or at the office. At the time of writing, one Pound Sterling would get you about nine Egyptian Pounds. Given that a can of soda costs about 2 LE (0.25 Sterling) in Egypt, as oppose to an average of 0.60 Sterling anywhere in the UK, how do you think the internet prices compare? 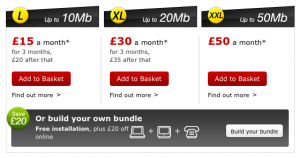 Firstly, a company like Virgin Media offers mind-blowing speeds of up to 50Mbps, but it’s only a matter of time until such speeds reach the north African republic. Moreover, the “average” package with a speed of up to 25Mbps is at 35 GBP monthly (there are even better deals if you choose to sign up for a bundle with a landline and television, but that’s beyond this post).

Now if we were to look at TEdata, which is the leading ISP in Egypt, the following is what the prices look like:

Notice that the maximum speed is up to 24Mbps, and a 16Mbps connection would cost you an amazing LE 1,355 monthly, which translates to about 150 GBP! Not only do you get a far inferior speed, not to mention the inevitable mediocre quality due to the primitive infrastructure, but you’re also paying five times as much. In a country where the average recent graduate gets paid about 300 GBP a month, those figures are unheard of.

It is normal for such technologies to be expensive at first, and to target the elite class that have the extra cash laying around, but this is a bit exaggerated. Time will tell if the prices in Egypt will follow the natural cycle of things, and settle down below the UK charts. At the moment, that seems highly unlikely. The important thing is for higher speeds to be introduced on one end, and for the lower speeds to become significantly cheaper on the other. That way we would be have a spectrum where almost everyone is cheaply connected at respectable speeds, while also serving the minority that require the highest speeds, and are willing to pay for it.