No one expects the Black Continent to be competing with the Japanese as far as internet usage is concerned, but few people know the seriousness and sadness of the situation. With the exponential growth of the Internet and the Web 2.0 services, the gap between many African nations and the rest of the world is becoming too big to handle.

According to the Internet World Stats, less than 6% of Africans are connected to the internet. Compare that with almost 27% of the rest of the world, and you will have an idea of the technology gap distancing the two. The sad part, in fact, is that there are a number of countries that have decent percentages, meaning this number is not an accurate representative: 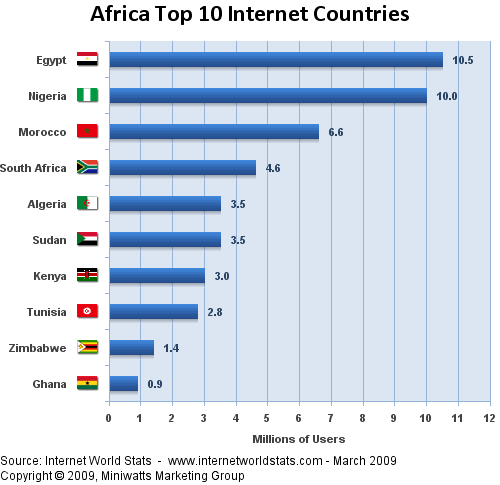 The results show that Egypt is in pole position, thanks primarily to it’s hefty 80 million habitants. In fact, only 13% of Egyptians are connected to the World Wide Web. The country with the single hightest usage percentage, discarding Seychelles, is Tunisia with 2.8 million users, representing about 27% of the population.

If we were to glance at the other side of the spectrum, you’ll find that countries like Burkina Faso, Cameroon, Chad, DR Congo, Ghana, Madagascar, Mozambique and Tanzania all have populations of over 15 million, with less than 5% connected to the Web. A mind-blowing extreme case is Ethiopia, with a population of over 80 million (like Egypt), with 0.4% accessing the Internet.

While we are in the developed and connected countries tweeting, poking on Facebook, communicating via VOIP and living in a parallel virtual and digital world, there are millions in Africa starving to death, without even having seen a computer. This shocking division is only getting bigger.

Living in such extreme and harsh conditions, surely the priority should be to provide the sub-Saharan Africans with the basic needs of life, not Gmail and YouTube. But it is of my humble opinion that the Internet can solve a lot more problems that one would expect. The simple act of connecting people everywhere in the globe can help handle some serious issues that are in the way of development and progress:

Therefore, we need to get the African continent on the Web. It will benefit the international community just as much as it would with the Africans themselves. As a North African myself, I am proud of the progress that Egypt has made over the last few years, no matter how insignificant in comparison to other power houses. And I hope my African counterparts can take advantage of the limited access that they are granted to do what the Internet is precisely made for: Expression.