If you’re like me, then you’d know that anyone who doesn’t try his or her best to use WordPress with any website developed is just crazy. The guys over at WP have spoiled us with significant improvements and developments with every new release, and this time it was not different. WordPress version 2.8, known as Baker, brings many new features which are sure to come in handy. 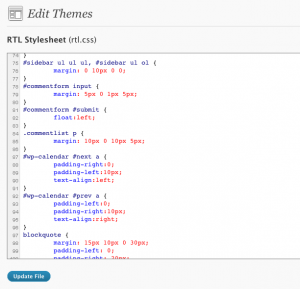 Upgrading is done with a few clicks and is smooth.

The one change I immediately noticed, and consequently realized how much I had been longing for it, is the Theme Editor page, which now shows colored code and line numbers. No matter how much planning you do, and how much work you finish on your local machine, as soon as your WordPress is on your remote server, there’s always a good bit of tweaking and fixing left. It has now become much easier to identify problems and fix them right away.

Just as you can browse and install plugins, you can now do the same with themes. Any real developer would not find this of much use at all, but for the average user who has decided to go independent and open-source, it’s a relief to know he or she can do everything directly on the spot, without having to worry about downloading, and then FTPing to the server.

The drag and drop has also been improved, making it more intuitive. Moreover, you now have control as far as the layout of the admin components is concerned, and can arrange things as you see fit. I’ve noticed however that the Wassup statistics plugin caused some minor problems, which were no longer there after after deactivating it. So I suspect Wassup to be releasing an update to make it compatible with Baker (either way, you should be using Piwik via the phpMyVisits).

Once again WordPress has raised our expectation, and once again it has outdone itself.

I upgraded my website to WordPress 2.8 as well. I was really impressed with how easy it was to upgrade. Click, Click and done. While I noticed that the interface changed, I didn’t notice much else. Maybe you can tell us more about the new features of WP 2.8 and what you think of them.