When Will IE6 Come To An End?

As a web designer, it’s quite a task to explain to a regular user the disadvantages of Internet Explorer 6.0. Mostly because there are so many reasons to hate the Microsoft browser, that anyone who has to deal with its annoyances will rush into yelling and swearing, and would never be able to make a rational argument. But generally speaking, this is why no one should even consider using IE6:

With all of those problems, IE6 continues to be a popular browser. In fact, 14% of the browser market share belongs to IE6. If you haven’t heard, there are strong movements across all corners of the Internet to wipe IE6 off of the world map: 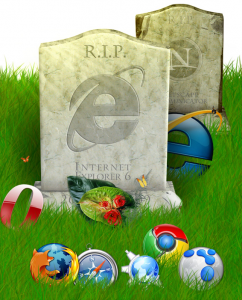 Despite the aggressive campaigns and awareness techniques, Internet Explorer continues to have a significant market share. Ironically, that is mainly Microsoft’s fault. Firstly, IE6 comes pre-installed with Windows XP. And since many users do not allow automatic updates, they remain using this primitive tool. To make it worse, Microsoft released Windows Vista, which was a complete failure, thus forcing users to downgrade to XP, and not not even upgrade their browser. So not only do they produce the worst web browser to date, they reassure it’s prolonged existence with an even worse operating system.

However, there is reason for optimism. The awareness campaigns are reaching more and more users and the Firefox add-ons are catching on by word of mouth. Much more importantly, the official release of Microsoft Windows 7 is just around the corner (ETA: October 2009), which will either ship with Internet Explorer 8, or with nothing at all. It’s simply a matter of time.

To all of the web designers and developers out there, I tell you: hang in there, this will all be over soon.

UPDATE: YouTube will soon be dropping support for IE6. Read about it here, or here.

Basically, when people upgrade to a Windows release newer than XP.
People – regular average users – don’t shop for software. Not just paid software, but also free software. Average users use computers like they use cars, TV and other appliances. I’m using what I have and don’t want to care about ‘maintaining’ it but rather focus on ‘using’ it, because that’s already difficult enough.

Nice listing of the pains of using IE6. You can help average users move from IE by adding a badge to your blog.
Get one from
http://www.spreadfirefox.com/

[…] Shockingly Big IE Warning For those users who are still convinced that the world is flat, and that the Sun rotates around the Earth, this plugin displays a scary bar across the top urging the user to upgrade to a civilized browser. It’s a lot of fun, and can help make this world a better place. You can view my post on the possible end of IE 6 […]

[…] way. After spending sleepless nights getting your website to render properly on IE6 (which I hope will be dieing soon), the next major task on the list is to validate your CSS, as well as the markup. In most cases, […]